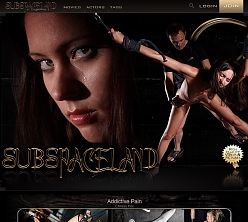 Overview:
Algebra. I fucking hated it in school and still do to this day. Hell, I'm so anti-algebra that I'd never heard of linear algebra or the terms 'vector subspace' and 'linear subspace' - but I have now. In certain fields of mathematics, a subspace is a space that takes on the characteristics of its parent space while exhibiting characteristics all its own. In BDSM culture and practice, subspace follows a similar definition, this time referring to the state of submission experienced by a slave, sub, or bottom during bondage. When entering or existing in subspace, it's not uncommon for a bottom to lose part or all of their ability to effectively communicate, making it one of the more dangerous kink practices. While in subspace, a disconnection from the real world takes place and renders the bottom little more than a tool reacting reflexively to whatever their dom does. At Subspaceland, many performers are reduced to unintelligible piles of sweat-covered limbs and skin and hair, run through the gauntlet by aggressive, calculating doms for your entertainment. Charging €29.95-a-month (or roughly $34 USD), Subspaceland is one of those independent fetish sites seemingly content to be on the fringe of mainstream porn, producing its excellent wares for a small but dedicated audience. Will you join that audience? Well, if you've a fondness for rope restraints, whipping, spanking, forced entry, outdoor bondage, plastic body-wrapping, and punishing penile insertions in any and every available hole, and if you're also prone to suffering from FOMO (Fear Of Missing Out) then you'd best swing by Subspaceland and see what tingling sensations are aroused in you.

Pros:
The mostly European models featured at Subspaceland are generally slim-figured sweet-faced twenty-somethings who submit to being dominated on camera in a variety of wicked ways. Featured slaves include Latvian blonde Lolly Gartner, Athina and Candee Licious of Hungary, Italian Anita Berlusconi, Netherlander Taylor Sands, and Julie Skyhigh, a high-heel fetishist from Belgium.

Hardly a small site, Subspaceland will soon be adding its 250th scene. Updates have been arriving on a weekly schedule for some time and, although older scenes are of lower quality, early Subspaceland works are just as risqué and daring as its newer productions.

Streamers will be thrilled to find gorgeously detailed 1080p video streams on hand. Downloaders, however, will be mighty pissed to find their options limited to a 720p peak resolution. What gives, Subspaceland? Is this an oversight or is there some bizarre reasoning behind this HD inconsistency?

Subspaceland's image galleries mostly contain screencaps and, worst of all, they've been crudely slapped with a Photoshop filter that appears to blur pixilation and give a soft, warm, and very phony glow to models' skintones. This post-production tinkering can't polish a hazy, interlaced screencap, no sir.