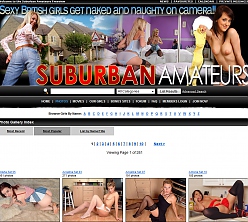 You might usually be attracted to sophisticated city girls or down-home country chicks, but unless you've experienced the unleashed sexual frustrations of a suburb-dwelling closet slut, you've got a world of carnal delights awaiting you. Suburban Amateurs gives its viewers plenty of examples that prove ladies from the 'burbs to be just as thrilling as their urban and rural sisters. More than 250 English women appear on this exclusive all-masturbation site, and each of them shows you exactly how she makes herself come. Fingers, dildos, feet, stockings, vibes, and an assortment of other tools aren't the only things entering these Brit babes' pussies, though; your imagination will, too.

Pros:
A new update is uploaded to Suburban Amateurs' homepage every few days, alternating between video and photo content. There's already a substantial collection online here, too, with photo fans especially well catered to. Furthermore, the 562 videos and 2,245 galleries are laid out cleanly and can be browsed chronologically, alphabetically, or by popularity.

Although it once trailed behind the competition when it came to image quality, Suburban Amateurs has made some progressive strides in that department of late. Photos are now offered in three resolutions (1280, 2000, 3000px) and can be viewed both online of offline thanks to the handy dandy zip packages. Videos reach both 1440x1080 and 1280x720 pixels and offer great detail whether streamed or downloaded.

Cons:
Suburban Amateurs' photo updates outnumber video updates about four-to-one, which isn't surprising considering the update schedule used to add four galleries and only one video in a given week. While the current update schedule rectifies this disparity from here on out, there's still a huge difference in the sizes of each archive.

Although there is now a good collection of HD videos online here, the majority of the scenes Suburban Amateurs offers are stuck in lackluster resolutions of and around 720x540 pixels due to the sites slow adoption of HD formats. Additionally, there are both 1080p and 720p resolutions online here, but you never know which one you'll get until your download has finished and you're watching some woman undress.

After nine years in operation, it's surprising and disappointing to find Suburban Amateurs still suffering from some server-side issues, namely wildly fluctuating download speeds that hit high transfer rates one moment then plummet to a snail's pace the next. The use of a download manager is certainly not advised.