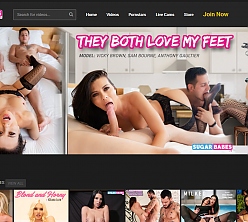 Gimme some sugar, baby, and point me towards SugarBabes.TV, home of Greek sex goddesses and Euro stars all eager to share their most exciting sexual prospects with a worldwide audience. SugarBabes.TV may not be very large or long running but it’s quickly gathering steam with its haul of hardcore encounters streaming to you in 1080p HD. With a tantalizing cast, great HD videos, and a very exciting future, SugarBabes.TV is one Euro site to watch out for.

Prioritizing streaming video but also offering downloads, SugarBabes.TV generally features HD footage peaking at 1080p. Saving videos is a bit tricky to pull of but explore your stream viewing options and you’ll find the Download button and be well on your way to amassing your own SugarBabes.TV curated collection.

Cons:
Ads in the members areas of adult sites are often annoying but when they’re advertising the very site you just joined, they’re not only annoying, they’re redundant. SugarBabes.TV not only allows these ads to keep pestering you inside the members area, they’re sometimes even placed over video streams.

When you’re rifled through the archive and found something to your fancy, don’t get too excited, especially not if you’ve got strong viewing preferences. Video streams playback in only one resolution and though this is usually 1080p, it’s not always. Video downloads are not as straightforward as they should be with the download link tucked away inside the video menu. Photo galleries are not offered in zipped sets.

Many video streams struggled to play back smoothly during the writing of this review. Downloads, on the other hands, seemed down for the count completely. No download link managed to actually transfer a file for local playback and the files in question were curiously HTML files, not the MP4s we assumed.

Conclusion:
SugarBabes.TV has a truly mouth watering name and an equally inspiring cast but ultimately falls pretty flat given all its shortcomings and the obstacles it places in front of members’ viewing pleasure. Videos stream in only one resolution and format with viewers given no choice in the matter. Downloads links lie in hidden menus, not in plain sight, and not only lead to HTML files but blocked, undownloadable HTML files at that. Even third-party means of downloading video streams failed to save a single scene to this reviewers hard drive. Throw in persistent advertising even after purchase, a modest archive of just 54 scenes, and a number of scenes entirely in Greek, and it’s clear SugarBabes.TV has some work to do before it’s truly deserving of your attention.