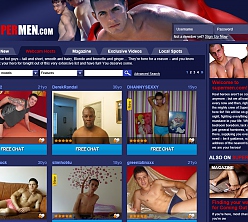 In need of a hero? Well, if Supermen's tour page boasts of being a haven for the under-appreciated gems of mankind, you'll find 'em here! A live webcam site with plenty of additional content to beef things up, Supermen invites you to sit down, relax, and make a new friend, one who won't mind virtually massaging your lower back after a tough day, who (probably) won't complain when you're too broke to visit, and will never ever make you sleep in the wet spot.

Overview:
Nicest guy in rock, Dave Grohl once penned a song about those who face danger and adversity, often on behalf of others, and persevere despite all odds; those men in our lives who set a shining example of what it means to be both a man and a human being. (That'd be the Foo Fighters jam My Hero then.) These are the kinds of men you'll meet at Supermen, a webcam extravaganza set to introduce you to any number of men who "will be on guard day and night, fighting everything that's mundane in your life." Whether your woes are of a social or economic, sexual or emotional nature, these fine examples of masculinity are fit for friendship, brotherhood, or perhaps more. As live webcam performers, the Supermen are under your influence at a price and can be counseled into many potentially compromising situations, from mere nudity to intense masturbatory adventures, even to couple shows both intimate and raunchy. With a sliding pricing system set by the webmasters and the performers, Supermen sees guys turning to online connections with strangers in order to make ends meet. Ain't love grand? Supermen might promise to live up to your every fantasy and expectation, but while they're super, they're also men, plain and simple, flesh and blood. As such, they too can be humbled by their own needs. Emotional needs, yes, but also physical. Perhaps Supermen can help you even transform yourself into a heroic figure of lust and desire; a savior for the saviors, if you will. Or perhaps Supermen will just get you off like nothing else. Either way, you'll be having a super day surrounded by these fellas.

Pros:
Supermen focuses on its live webcam shows, shows which see guys of many different personal styles and predilections and whose names and ages are clearly displayed. Muscle men and twinks, leather daddies and pigs, athletic hunks and "straight" guys… they're all here and often number a few dozen online at any given time.

The live Supermen performers seem to have their collective fingers in a whole mess of sexual pies and, assuming you choose the right one, you could find yourself watching a plump ass jiggle around, a stiff dick explode, two guys share their affection, or even go cam-to-cam with your new favorite performer.

As long as you keep an eye on your spending, Supermen can be quite an affordable place to indulge in a little homoerotic activity. In the smallest bundle, 25 credits can be purchased for $25 (and you'll get another 25 as a bonus) and with most guys offering free basic chats and charging between 1 and 4 credits per minute for the far more risque Private chats.

In addition to the main roster of live performers and a collection of 720 nonexclusive hardcore movies (each costing 3 credits to view), Supermen also offers a Magazine section sporting article about dating, the hookup scene, STDs, gay dance anthems, a glossary of homosexual terminology, a guide to gay subgroups and even tips for approaching your coming out. Talk about helpful, Supermen goes to another level!

Cons:
With few bells and whistles to guide your hand and your choices swiftly, browsing Supermen is a bit of a chore. Models are only sortable by a trio of text menus, none of which make any real strong effort to find exactly what you're after, just to get you in the general ball park.

Although some webcams are broadcasting in "High Quality" this certainly doesn't mean High Definition videos are on hand. Resolutions peak at 640x480 pixels and bit rates are't impressive enough to warrant my going into detail. The archived "Exclusive Videos" are also visually unimpressive also at 640x480 pixels.

Most of the guys performing live via webcam at Supermen don't speak English as their primary language. English-speakers will still likely be able to get the gist of what they're saying (and get their own gists across), but having a full, proper conversation seems like a far off opportunity.

The bonus don't really add up to much: the Exclusive Videos don't appear to be exclusive, look quite weak, and are at least 15 years old; the Magazine is basically a handful of minor blog entries containing information everyone already knows. (It's Raining Men is a popular gay anthem? No way!)

Conclusion:
The problem with webcam sites is not only that they can quickly become expensive as soon as they start getting interesting, but that they're a quality control nightmare. For every attractive performer with some conversational potential there's a dozen guys who ignore your comments to lazily dance to reggaeton only stopping for the occasional shot-and-chaser combo. At Supermen, a site that basically promised to remove any suffering you experience as a result of the lack of untouchably perfect men in your life. The cam models featured here are mostly fit young South and Central American, Eastern European, and South East Asian guys who seem eager enough to catch your interest. Once the videos start rolling, though, it's dismal video quality all the way! It's not that Supermen is lacking interesting and attractive guys and more that it's lacking anything else of real interest, anything else that'll keep you coming back time and time again after all your credits have been flushed down the financial sinkhole that is ASamuel21cmREC.