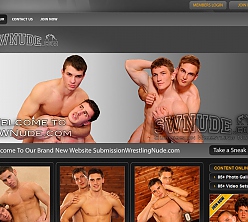 You might've wrestled in college and felt the pangs of desire during a bout or perhaps you've simply been appreciating the naked, manly sports of the ancient Greeks and Romans for some time, but if you've never taken this fondness for hunky men competitively grabbing at each other to its logical pornographic conclusion, allow SW Nude to guide you there. Offering impressive HD videos and high-res photos that show a pair of athletic guys struggling for physical dominance, then beating off and retiring to a romantic couples' shower, SW Nude is your best (and possibly your only) bet yet!

Overview:
The "SW" of SW Nude stands for Submission Wrestling, which some Wikipedia editor has defined as "a formula of competition and a general term describing the aspect of martial arts and combat sports that focus on clinch and ground fighting with the aim of obtaining a submission using submission holds." The Wikipedia article - which, knowing fuck all about wrestling, I'm perhaps relying on too heavily - goes on to detail the attire worn by submission wrestlers: "shorts, skin-sticky clothing such as rash guards, speedos and mixed short clothes so they do not rip off in combat." The folks at SW Nude, however, say "Fuck clothing! Let's wrestle naked!" And wrestle naked they indeed do. An all-male site focusing not on hardcore sex, but on playful, if quite aggressive, grappling, thrusting, and thrashing about. These well fit fellas sweat, pant, and all but collapse after putting in considerable effort to fell their opponents, but there's usually time for some flirting, too. A truly original gay-focused site, SW Nude charges only $14.95 for one month of access and does all but guarantee a thrilling and unique pseudo-sexual athletic experience.

Pros:
I've been accused of perversion and extreme sexual libertarianism, but I've frankly never even considered all-nude all-male submission wrestling as even a niche area of pornographic interest. SW Nude is a trailblazer in the field of sexualized athletics and certainly deserves accolades for this bold endeavor! Kudos, SW Nude!

Wrapped up in WMV files, the 1280x720 pixel High Definition videos of SW Nude offer ample visual and aural detail during the bouts, the beat-offs, and the showers. Photo galleries accompany each wrestling scene and the 1200px shots can be viewed online both manually and via an automated slideshow, as well as being available in zipped sets.

Updates are arriving here on a weekly basis, giving much needed content to this admittedly small site. And, come to think of it, the less than impressive size of SW Nude is probably the reason its staff have set monthly membership at only $14.95, a great deal for anyone interested in this uniquely physical content.

Cons:
If you don't understand submission wrestling, you may find SW Nude hard to get into. I don't, and I was left wondering why certain holds brought about the end of a round while others, although forcing an opponent into submission, did not. Then again, who's to say SW Nude is following the rules of professional wrestling associations anyway?

Although intimately connected to William Higgins and its offshoot sites CFNM EU, Male Feet 4 U, and Str8 Hell, access to these sites has not been included in SW Nude's membership packages. It's too bad, too, 'cause a site with less than 100 scenes is bound to leave many folks wanting.

Most of SW Nude's scenes focus on the action itself and don't bother with too many pleasantries, but when the combatants do speak, they generally speak Czech. With no English subtitles available, most of you reading this will be left in the dark, never understanding the words spoken by the victors or the losers.

Providing members with HD videos is great, but providing only one video format (and WMV at that) is bound to cause a few problems for Mac users and those with alternative viewing platforms and preferences. It only took me about seven minutes to convert one of these WMVs to MP4 for smooth Mac playback, so it's a wonder the webmasters haven't added a MP4 option yet.