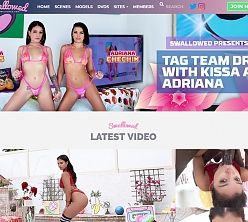 Swallowed sees a few different dicks being fed to the stellar cast. Adriano brings the most heat, enjoying lots of throat fucking and spit swapping. Logan Long and Alex Jones also contribute their cocksmanship but tend to take a less aggressive approach, letting the women do most of the work with far less instruction than Mike tends to give.

Each Swallowed episode offers 720p and 1080p HD streaming and downloadable videos, the latter looking seriously impressive. Detail is very rich here, as is the huge color palette. Swallowed is arguably even more colorful than Adriano’s other sites and series, the multiple girls giving lots of visual variety in each encounter.