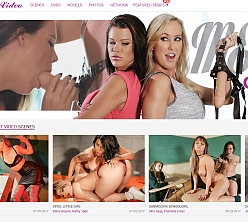 Overview:
Many happy home viewers are loudly proclaiming our current decade as one of the greatest in television history. Bigger budgets, major stars, acclaimed creative forces, and some of the most inventive drama yet seen on any American screen, that’s what makes a memorable TV show these days. Sweetheart Video may not be found alongside your HBOs and your Showtimes (or even your TruTVs), but it’s definitely part of a porno vanguard changing the way people view sexual entertainment. Devoted entirely to depicting steamy, sordid, and even depraved lesbian sex, the kind you won’t find at many other studios, the kind you won’t soon forget, Sweetheart Video has been producing such titles as The Coven Wives, Mother Lovers Society, My Lesbian Mentor, Lesbian Strap-On Bosses, and the Prison Lesbians series, as well as star vehicles Kayden, Jessie, and Brandi Loves Girls. Charging $29.95-a-month for access, Sweetheart Video also promises network connectivity, High Definition viewing, and exclusive content that can’t be found anywhere else, making this one intently tantalizing journey into the more salacious and sordid corners of sapphic sexuality.

In HD streams and downloads peaking at 1080p, videos offer strong detail and heavy atmospheres of lust and desire. Some scenes are shot under natural daylight for a summery feel while others are set in secluded bedrooms with softer, gentler lighting giving a more intimate and romantic air. Both streams and downloads make for excellent viewing, as do photo galleries containing 1920px images online and in zipped sets.

Cons:
Updates may land at Sweetheart Video quite frequently, but they don’t appear to be held to a regular schedule, making new arrivals a little hard to predict. There’s a very strong collection here but lately Sweetheart seems to be decreasing its production and release schedule. Let’s hope this is in preparation for a brand new phase around the corner.

Not all the Mile High Media sites are as busy adding new content as others. Cherry Pop, for example, hasn’t been updated in about four months. Mile High sites also veer off into all kinds of hetero and bisexual hardcore realms that may not contain much worthwhile viewing for devoted fans of lesbian smut.

Founded back in 2008 by Nica Noelle and Jonathan Blitt, Sweetheart was initially an outlet for Noelle’s directorial efforts. Now, left in the capable hands of Dana Vespoli, Sweetheart tries to continue in the same vein as its earliest works. Sometimes this produces clear hits, other times clear misses. Was Vespoli the best choice?