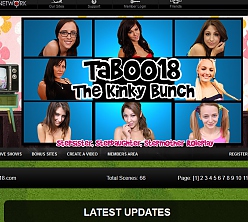 Taboo18's members aren't limited to viewing only this Fetish Network site. Thrown in at no extra cost for all paying customers, Fetish Network's 45 other sites can also be enjoyed at your leisure. And, thanks to Mr. Pink's nose for bargains, you can now join Taboo18 and Fetish Network for a paltry $19.95-a-month!

Cons:
Across Fetish Network, including on Taboo18, videos are mislabeled, declaring higher resolutions than what results from a download. A "4320p" video only reaches 1080p while "1080p" hits 540p and "720p" only reaches 270p. If not for the blatant promise of Ultra-HD content, this would only be a minor issue. Now that Taboo18 brought "4320p" into it, however….

In character-based scenes hinging on sexual chemistry, tension, and decent acting, the models/performers are of vital importance. Why Taboo18 hasn't managed to create a model index complete with detailed performer profiles is totally beyond me. With stunning newcomers like Marsha May and Rachel Madori doing solid work here, it'd be great to see them celebrated properly.