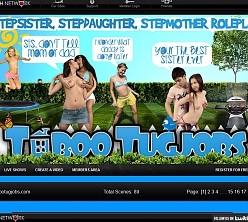 Like many other Fetish Network sites, Taboo Tug Jobs now offers its movies in High Definition formats. At their best, these HD movies look quite good in 1080p HD frames (among other sizes) and can be both streamed and downloaded.

Updates arrive at the Taboo Tug Jobs homepage every Wednesday, giving members something new every week. And, although its monthly cost is quite high, a Taboo Tug Jobs membership is well worth it, if only for the incredible Fetish Network access all members are granted. Over 60 websites from Sexual Disgrace and Pain Vixens to Amateur Trampling and Smother Sluts will be at your disposal.

Cons:
Some scenes incorporate some light genital-on-genital rubbing and teasing, but most of Taboo Tug Jobs scenes are exactly that: tug jobs (or handjobs, if you prefer) with only a little licking and sucking thrown in for good measure. If you want to see these ladies fucked, you'll be left wanting.

Almost without exception, Taboo Tug Jobs' image galleries contain screencaps and not photographs - what a pity, too! Photos would provide potentially hyper-intense stills that stare straight into the women's' eyes as they tease and taunt and stroke their victims, conquests, and taboo-smashing step-relatives to messy completion. It was simply not to be, I guess.

There's no particular 'type' to Taboo Tug Jobs' women: they range from very heavy African American BBWs to tiny blonde teens to mother-daughter duos sharing a sexually educational moment together. As such, there's bound to be plenty of scenes that won't appeal to you at all.