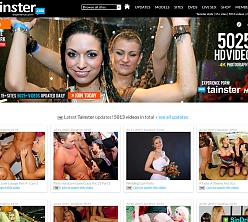 Overview:
'Tainster' might sound like it's describing some mischievous imp that runs around tapping people behind the scrotum and before the anus on the area known colloquially as 'the taint' - but it ain't. Describing itself as "The Amusement Park of Porn," Tainster is a European network that prizes originality, outlandish sexual acts, and fetishes that everyone (and their freaky girlfriend) can get behind. Home to sites dealing in distinct fetishes like WAM (wet-and-messy), CFNM (clothed-female-naked-male), drunken parties-turned-orgies, watersports, huge ejaculations, and hyper-orgasmic women, for starters, Tainster's boldness leaps off your screen just as clearly as its models bust out of their skin-tight shiny satin blouses. Promising members access to High Definition videos hosted by 15 exclusive websites that collectively see daily updates, the Tainster network is not only one-of-a-kind, it's a very enticing oddity, too. Fork out €29.95 for access (that's about $33 USD) and a world of carnality unfolds before you like a magnificent vagina eager to ensnare a thick-veined, pulsing cock. Why not throw yourself at the mercy of Tainster?

Don't fret, though, skin-oglers, there's a mix of nude and non-nude content, hardcore and almost-hardcore, here at Tainster. A new episode arrives twice daily and brings with it some gorgeous imagery and outrageous sex. High Definition videos stream and download at 540p, 720p, and 1080p resolutions, offering clear and vibrant images on each site. Photographs can be viewed online or downloaded, hitting 1920px in either case.

Any network adding two updates each day will soon reach a hefty size. With more than 5,000 scenes online, Tainster's already there but it is now nevertheless available at an almost stupidly affordable price: just €19.99 (approx. $22.25 USD) gets you inside for a full month.

Cons:
Standing at just 1280x1920px, Tainster's photo content doesn't quite have the same visual splendor as the HD videos. It'd be great to see photos reach 3000px in the near future. If Tainster continues to lag behind the competition in this regard, there'll soon be many very upset photo lovers leaving Tainster for greener pastures.

None of Tainster's movies supply English language translations of the dialog you'll hear in Czech, Russian, French, and Spanish. Sure, many scenes are so noisy and chaotic they require few words to explain what's going on, but there's plenty of simpler scenes that would benefit from translation.