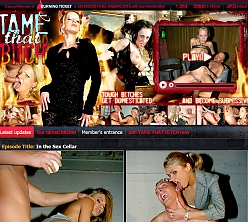 Instead of meekly accepting the demands and commands of their female companions, co-workers, landlords, and employers, the men of Tame That Bitch actually do tame those bitches. Presented by the illustrious Burning Ticket network, Tame That Bitch sees snarky, unruly women dominated by the men they taunt and receiving the kind of punishment that often bears repeating again and again until the punisher and the punished are lying in a sweaty heap of limbs and fluids on the floor. Gee, this could be interesting, fellas!

Overview:
LA's legendary misogynist shock jock, Tom Leykis, calls upon his listeners dealing with troublesome female companions to "dump that bitch!" And what, give up all that mediocre pussy, all because she wants yo to pay for dinner and doesn't like the car you drive? Perhaps instead of abandoning ship you should try to Tame That Bitch. Hosted by the notoriously decadent Burning Ticket network, Tame That Bitch features exclusive hardcore scenes in which some boisterous, borderline abusive woman is given her comeuppance by one aggressive fellow with a hard-on for, well, for bitches. There's plenty of rough sex and vigorous pounding here, but joining those two tantalizing features is a healthy dose of bondage, role playing, and even some hot wax torture, all of this ensuring Tame That Bitch doesn't disappoint those used to Burning Ticket's wildly debaucherous brand of sexual entertainment. Costing $24.95 for 30 days of access, Tame That Bitch isn't asking all that much of you and certainly not as much as you're asking of the titular bitches. Not by a long shot.

Pros:
Fans of rough, aggressive sex will surely find Tame That Bitch quite appealing. After all, the guys turning the tables on their demanding, obnoxious women friends do give them a hell of a thrashing once the panties come off. Sometimes, though, the girls push back. Hard.

Tame That Bitch's members enjoy free access to the other 17 websites comprising the Burning Ticket network. And, best of all, you, dear reader, can now get inside for just $19.95 a month thanks to Mr. Pink's devotion to discounted (but high quality) smut!

Cons:
May 13, 2010 saw the last update to Tame That Bitch's unfortunately tiny archive. This scene, the 51st, was the final update and Tame That Bitch has been dismally inactive ever since.

The videos presented here only reach 720x576 pixels and look, I'm afraid, like the drab, color-drained remnants of a bygone era - in fact, they are. Compared to many other fetish sites, HD-equipped fetish sites, Tame That Bitch looks pretty damn bland.

Although it's only a small archive, browsing Tame That Bitch's content could be much easier with the addition of keyword tags and content categories. Want to check out that hot wax action I mentioned earlier? Keep scanning those preview pics, friend, 'cause it could take a while.

Conclusion:
Like many Burning Ticket sites, Tame That Bitch has unfortunately dropped off the update schedule altogether; there hasn't been a new scene added here in three years. What is online isn't particularly thrilling: 51 scenes and 46 galleries of lackluster imagery (for the videos, at least), aggressive but not especially interesting sex, and fairly dull scenarios. There's so little content here that members will undoubtedly head off into the Burning Ticket network in search of more satisfying fetish porn. Unfortunately, the problems of Tame That Bitch are the problems of Burning Ticket and it's probably best for you to find another rough, male-dominated hardcore site if that's your flavor. After all, they're hardly in short supply.