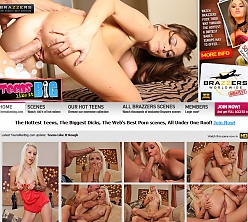 Looking better than ever in bright and colorful 720p and 1080p High Definition resolutions and appropriately high bit-rates, Teens Like it Big's video content is as bubbly and brilliant as its subjects. Photos also look quite good, especially at 2495px in zipped sets, but it's the videos that take top prize here and are most worthy of your complete attention. Helping things along is a set of stellar viewing options for total customization and convenience.

Do you wanna see Gianna Nicole struggle through piano lessons from a stiff-dicked teacher? How about watching a psycho-sex therapy session devolve or cuckolding scenarios or kinky math tutoring sessions? No, you're just here for the fucking, aren't you? In that case, the often ridiculous scenarios of Teens Like it Big scenes might be something you'll immediately fast-forward.