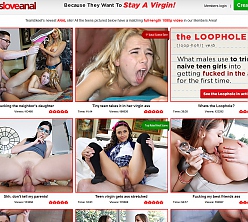 Overview:
It's true what their parents say (it always is, every generation), "Teenagers are the worst!" They're unreliable, untrustworthy, unmotivated, and undoubtedly spoiled by a coddling, pampering world that worships youth like it's the Kamadeva, the Hindu god of love and sexuality, and they're hard-on afflicted drones wandering around aimlessly, their minds mired in their own pasts. Really, though, it's jealousy. Many adults simply miss their own youth and wish they could take another shot at perfecting what's frequently referred to as "the prime of your life." In short, they're annoyed that today's young adults are heading towards total sexual freedom while they're approaching middle-aged boredom. Teens Love Anal shows just how deviant today's young adults can be with an exclusive collection of Team Skeet's finest rear-end encounters rendered beautifully in High Definition video. Such tantalizing young models as Kylie Sinner, Alina West, Mandy Muse, and Alice Green all give their asses to their lovers in scenes shot with a casual everyday bent, filling real-world scenarios with more intense ass-fucking than you could've imagined, all for $28.97-a-month. If there's one thing this very new Team Skeet site should prove, it's that teens do indeed love anal sex, perhaps almost as much as we enjoy watching them take it.

Rendered beautifully in 720p and 1080p HD video streams and downloads, Teens Love Anal's visual splendor gives you ample opportunity to ogle the tightly-gripping girls as their most forbidden hole is penetrated, plowed, and pumped full of thick cock. On occasion, the guys will step back and leave a scene just to two girls, each one exploring the other's ass with tongue, finger, and toy; these lesbian scenes are very steamy.