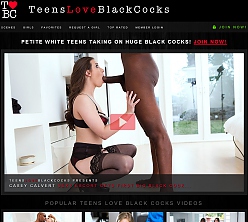 These days, teenagers seem to love Snapchat, vaporized cannabis, and terrible, terrible music. If you ask the folks behind the Team Skeet network about teenage interests, hobbies, and obsessions, you'll find one of their latest sites dealing entirely in one taboo situation again and again. Hung black guys may be hired help, unwanted guests, or family friends, but they soon become scorching hot lovers, filling the tight teens in HD videos exclusive to this very site. Fairly new and not yet brimming with fresh interracial fucking, Teens Love Black Cocks is nevertheless on its way up!

Pros:
Teens Love Black Cocks sees the likes of Yhivi, Melissa Moore, lily-white blonde Jenna Ivory, August Ames, and the teeny-tiny Piper Perri indulging a long-held fantasy, seducing or being seduced by a strong, handsome African American man, of falling to their knees and having their mouths filled, and of riding that monster schlong until she and then it erupts. The girls and guys seem to really be enjoying themselves, too.

From tennis lessons turned pussy-licking sessions and landlords taking sexual favors in lieu of rent money to tutors fucking students, rappers boning fans, and a mom roping in a hot black neighbor to show her daughter how to best get over a breakup, the scenarios seen at Teens Love Black Cocks are very loosely based in reality. There's no gonzo-style addressing the camera here, and the plots and characters only make this hot site hotter.

Cons:
Once inside Teens Love Black Cocks, you'll notice that navigation tools and features are largely absent or useless. Producing solid scenes of hardcore IR fucking is clearly TLBC's priority, not creating an impressive website loaded with essential resources for members. At least the sex is super-hot!

Even the featured models are given short shrift in some ways. Profile pages are totally absent, giving you no means of learning more about, say, Yhivi or Lyra Louvel. When browsing TLBC, it can also prove far too difficult to find out the name of a given performer; they're not always identified clearly.

Teens Love Black Cocks is created and produced from the Team Skeet crew. Unfortunately, access to Team Skeet has not been provided to TLBC subscribers. Will this site eventually be integrated into the network or will it always be held to the side, commanding further access fees?

Conclusion:
Quite small in size, not particularly well constructed, and rarely managing more than two consecutive weekly updates, Teens Love Black Cocks is far from the best site Team Skeet has to offer, but that hardly means it's without merit. Home not only to today's sexiest and sluttiest teen and young adult pornstars - Yhivi, Casey Calvert, Nikki Nightly etc - but to the big black dicks (and their owners) that will be giving them a memorable hardcore outing, this sadly non-network site from Team Skeet is headed toward its 50th scene but struggling to deliver a new episode each week. Video streams are stuck in 540p frames while downloads look awesome at 1080p. Photo galleries are kind of limited, too at 1350px in downloadable zips and could stand an upgrade. With such delectable white-meets-black body collisions happening here, some of them extremely well played and performed, it'd be a shame to leave these good-but-not-amazing streams and galleries where they are when pure visual bliss lurks right around the corner.