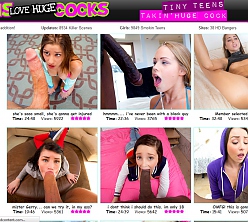 Not all young women can handle big guys. Hell, ask your friends both male and female if there's such a thing as "too big" and they'll likely agree. That's not the case with the foxy young fillies of Teens Love Huge Cocks, however. These teen-twenty-something babes are so eager to try out the biggest dicks they can, they drop to their knees and start slobbering as soon as Chris Strokes or Johnny Sinns whips it out. With Reality Kings' standard HD videos on offer and a whole network of super-smut at your fingertips, Teens Love Huge Cocks is sure to dazzle any porn lover who prefers girls who'd never be described as sexually timid.

Unlike many other RK sites, Teens Love Huge Cocks only adds a new scene every other week, but it's still growing steadily and now holds 116 original scenes. Joining Teens Love Huge Cocks is no longer such a risk, not with a $17.95-a-month discount in place to provide you, the Mr. Pink's reader, with better bang for your buck. Oh, and don't forget that all Reality Kings sites include complete network access for all members!

Cons:
Some scenes don't appear to have been initially shot with Teens Love Huge Cocks in mind and perhaps only end up here because a girl notes the impressive size of her co-star, leading Reality Kings crew to sort it into the TLHC pile. The difference in style and scenario among these scenes definitely could use some smoothing out.

Videos download at 1080p but not 720p and stream at 720p but not 1080p. Providing members with both 720p and 1080p both online and via download would increase viewer satisfaction and ensure you're not stuck choosing between large file sizes or low visual quality. Photos, standing at 1800px and looking good, aren't in desperate need of an upgrade, but it would be great to see.

Updates landing every fourteen days means there's too much downtime for TLHC members. A common complaint among RK subscribers is that TLHC and Moms Bang Teens, the two most popular, most promising, and most genuinely star-studded RK sites, don't update anywhere near often enough for viewers' liking.

Conclusion:
Loving huge cocks doesn't always make for a compelling pornstar or pairing or scene, but at Teens Love Huge Cocks, the Reality Kings crew gets this particular site very, very right. Hell, it's almost perfect! Aside from updates arriving half as frequently as we'd like and the occasional ill-fitting scene seemingly shot for another RK site, and with the hopeful eventual inclusion of streaming and downloadable videos in both 720p and 1080p, Teens Love Huge Cocks would be kicking some serious ass. As it stands, there's more than 100 incredible teen and twenty-something babes here, each one taking her time to really get warmed up and show her penile appreciation before jumping aboard for a near-riotous riding. Teens Love Huge Cocks has some areas needing improvements, but nevertheless remains one of the most arousing, entertaining, and compelling Reality Kings sites currently in operation.