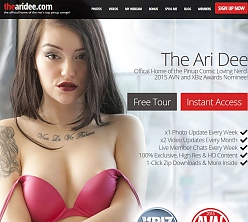 Self-professed comic book and video game geek Ari Dee doesn't look like the token female participant in a weekly D&D meeting, but she's nevertheless going to have you reeling from her mystical spells cast via the World Wide Web. On her official website, The Ari Dee, this tattooed twenty-something brunette shows off her ultra-sexy physique and look (a mix of punk, burlesque, glamor, geek, and heavy metal styles) in a wide range of video and photo updates, many of them exclusive to this site. So, put down your Official Handbook of the Marvel Universe and check out Ari Dee. (Don't worry, some of your beloved comic book babes make appearances here, too.)

Overview:
Nowadays it appears more and more young women are throwing the future of their bodies to the wind, taking a shot of whiskey then getting inked or pierced in an effort to portray themselves as carefree libertines with no conscious awareness of social norms. Of course, most of the time this tough-chick posturing is as obviously bloated and phony as middle-aged dudes buying Lamborghinis and Porsches, but Ari Dee seems a bit different. Boasting of her love of comic books, video games, cosplay, barroom trivia, and watching "anything that will make [her] laugh", sultry tattooed brunette Ari Dee aims to convince you of her geek credentials. Do you accept the challenge or are you so bowled over by Ari's vivacious style and personality that you're headed for the sign-up page already? The Ari Dee (her self-titled website) costs $24.99 to access and, for that fee, Ari says she'll provide members with HD videos, high-res photos, partial and fully nude content, live camshows, and personal interactions with Ms. Dee herself. Does all this sound like something you'd be into or are you not at all interested in watching an alt.princess swan her way from her bathroom door to within your (virtual) reach, all the while sweet-talking you and shedding what few items of clothing she had on in the first place? Thought so. Let's check out The Ari Dee!

Pros:
Ari Dee is a 27-year-old part-Native American woman living in Los Angeles and making a name for herself in adult modeling and entertainment. As she's largely a photo model, Ari's site is loaded with galleries capturing every facet of her character and sexuality. From posing in Marvel Comics panties with a stack of Deadpool back issues under her arm to lathering her naked body with coconut oil and posing in a mirror, Ari's a vixen!

Shot in High Definition formats and available to stream or download in 720p and 1080p HD MP4s, Ari's videos capture her fine figure and lusty attitude quite well. Many scenes are shot with a darkly atmospheric touch that lends a depraved air to some situations. Photo galleries also capture Ari as she strips, exploits your oral fixation, rubs herself down with lotion and oil, cosplays as Poison Ivy and others, and steams up her shower many times over.

All members of Ari's site receive bonus content for their loyal patronage: mobile device wallpapers, Ari's live webcam shows, archived and live members-only chats, and, the best bonus of all, access to Sweet Ass Angels, a megasite filled with more gorgeous webcam and adult models much like Ari herself.

Cons:
The Ari Dee is not a particularly large site for one devoted to a single performer. As Ari has shot for God's Girls and numerous webcam sites, so there's likely more content out there that, like much of what's online here, is not exactly exclusive and could beef up this otherwise fairly middling archive.

Updates are not held to a strict schedule at The Ari Dee, so you're never quite sure when you'll next see Ari being her incredibly sexy self in either photo or video form. The last few months have seen photo updates fall from three-day intervals to one full month between arrivals. Videos have proven even more irregular and infrequent.

Most videos this reviewer attempted to stream or downloaded had lots of trouble playing smoothly. Many stalled after only a few seconds of playback or download - both streams and downloadable files show this issue - and left me with no choice but to try again, usually leading to a second failure before any transfer would finally complete.

Conclusion:
Cosplayer, alt.model, and self-professed geek Ari Dee doesn't really seem like much of a geek, but that's likely because many find it hard to believe a woman this devoted to showing how attractive she is was really once a pimple-faced, braces-wearing Animal Man-reader. Whatever the depth of her geekdom, The Ari Dee presents Ari in a very flattering light in its 2000px photo galleries and 1080p HD videos. Ari strips and poses and, quite frankly, does little else, but these modest acts of seduction could very well be enough to start your heart pounding and your dick throbbing - such is the allure of a former God's Girl gone solo. Free access to Sweet Ass Angels is a solid bonus given to all paying members, but it'd really be great to see more action on Ari's update page. With no frequent and consistent content additions for some time, it's starting to seem Ari is headed into another phase of her life and career just as she was getting started on this one. Come on, Ari, your fandom wants more of you!