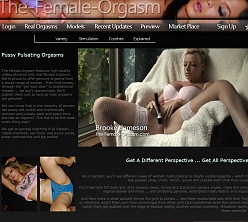 With so many sexually frustrated women out there complaining about their men's lack of penile proficiency, manual dexterousness, and tongue training, it shouldn't surprise anyone to find that, left to their own devices, these same women are capable of mind-blowingly intense orgasms that see them shuddering and shaking and quivering with every wave of hot, tingling sensation their climaxes bring. The Female Orgasm is an HD-equipped site that presents sexy women both amateur and professional showing how they get themselves off. I'm even willing to bet that some of the world's most gifted male heterosexual lovers have never seen women cum like this.

Overview:
An Idaho scientist has embarked on an aerial search for Bigfoot. Hoping to finally discover hard evidence of the legendary mountain man-beast from a blimp, the effort, dubbed "Falcon Project", has been met with ridicule from peers of Jeffrey Meldrum, an anthropology professor at Idaho State University, but still he persists. One can't help but wonder, however, if anyone's going to such efforts to locate, identify, and catalog one of nature's other elusive wonders: the female orgasm. One site that is making a valiant effort in this regard is the rather obviously titled The Female Orgasm and it presents "high quality videos showing only real female orgasms". Boasting of its extensive variety of models, "from first-timers, through the 'girl next door' to professional models", The Female Orgasm will shoot any attractive woman as long as her orgasms are authentic. Here you'll see pussies rhythmically contract and pulsate, and every erect nipple, moistened labia, and broad smile that comes along with each and every thigh-shuddering orgasm. Membership to The Female Orgasm costs you $29.95 per month, and the allure of witnessing, up-close and personal-like, genuine female orgasms surely makes that cost worthwhile, doesn't it?

The videos pay close attention to the orgasming women and you'll marvel at the views presented here. Cameras go in for explicit, detailed close-ups taht show every little bead of moisture forming on her labia, every twitch and contraction as she shudders to a climax, and the slow comedown that leaves her face blushed and glowing.

Presented in streaming and downloadable forms, the videos of The Female Orgasm peak at 1280x720 pixels in DivX format. These High Definition videos look quite good and present highly detailed views throughout their runtime. There's also plenty of other formats, including some for portable devices, so no member is left wanting. Photos are also high-res and reach peaks of 1600px online and in downloadable zips.

A new scene is added to The Female Orgasm's existing archive every day, meaning you can augment your own daily self-pleasuring habits with a new a woman throughout the week.

If the watermarks attached to the site's images and videos are any indication, some of this content was originally produced for and hosted by sites other than The Female Orgasm, specifically Fem Flood and Hands On Orgasms. This appropriated content isn't limited to the earlier days of The Female Orgasm either; there's plenty of recent scenes with those watermarks, too.

Those of you who favor photo content may be disappointed to find that The Female Orgasm's video collection outweighs its photo collection about 3-to-1. Photo updates arrive about twice a month and definitely could be coming much faster and more frequently.