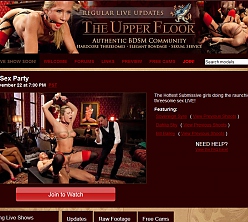 Overview:
The now-infamous Kink.com, housed in the imposing Moorish fort at the San Francisco Armory, has courted controversy for stooping to depict some of the most debasing, degrading, and dehumanizing sexual and erotic activities humans are known to practice, all in the name of entertainment. It's critics claim Kink's shoots take abused and antisocial porn "victims" and enslaves them to the almighty dollar, exploiting them sexually in the process. "But some people like being exploited," Kink maintains, and it's right. Nowhere is this more evident than at The Upper Floor, one of Kink's most sophisticated and advanced endeavors yet. The Upper Floor is, in effect, an exclusive adult club that meets to relax, drink, and order around the submissive sluts and slaves provided for at their service. Whether that means ordering some drinks to be delivered by a naked, shackled cum-covered slave or instructing such a slave to slap herself as your try to force another of her explosive orgasms. The possibilities are endless at The Upper Floor and thankfully we have Princess Donna Dolore and a gang of demanding men leading us through the proceedings. After all, with up to a dozen women working as Upper Floor slaves at any given time, it can get pretty confusing from our HD-equipped vantage point. Oh, and before you pass up the chance to join The Upper Floor for $39.99-a-month, I should probably mention that home-viewing members can actually participate in these sordid sex parties through the wonder of live video streaming and a monitored chat room where you can bark out your orders (or at least ask politely) and see if they're carried out. Are you ready, dear reader, to enter one of the nation's most notorious sex clubs?

Pros:
Set in a large banquet hall and parlor at the top of the San Francisco Armory, The Upper Floor sees Kink's rulers and distinguished guests in charge of their environment, especially the women slaving away at their feet. Home viewers can partake in live shows, joining the live chat and making requests or demands, shouting approval or abuse, and watching every sick sexual game or trial the slaves are ordered to play or complete.

Every week, on Fridays to be precise, The Upper Floor hosts another live broadcast and welcomes one, two, three or more slaves to begin to continue their extensive training. There's already an impressive archive of 416 scenes here, most outfitted with multiple photo galleries, but it's the live shows you'll really want to indulge in.

Cons:
Like all Kink websites, The Upper Floor suffers from a weak navigation system. Without an advanced search engine, keyword and category tags, or other such tools to get you from A-to-B as quickly as possible, it can take far too long to find the Upper Floor scene that'll tickle your sensibilities. Scenes are long and varied, often with distinct and lengthy segments, activities and trials, making them even harder to accurately preview.

Kink has always provided good a synopsis along with a hardcore scene, but those seen at The Upper Floor could stand to be far more detailed. Full rundowns of the scenarios in play, the orders barked out and obeyed (or not), and any punishments or rewards served. In view of Kink's navigation issues, these scene descriptions are more crucial than ever at The Upper Floor.

A problem plaguing all Kink sites (at least for now) is the lack of 1080p High Definition videos. All content peaks in 720p video frames that, when compared with many competing sites, fall a little short. It'd be great to see 1080p videos online in the near future, especially at visual chaotic The Upper Floor.

Having been to The Upper Floor and seen its decor, its artworks, its couches and restraints, I must say I think there are dozens upon dozens of interesting and evocative camera positions that could be exploited. We're talking about almost an entire floor of a Moorish castle for pete's sake, surely the photographers could throw a little more inspiration and imagination behind their work!

Conclusion:
The Upper Floor is an amazing accomplishment of which Kink should be enormously proud. By involving home viewers in live broadcasts/shoots, The Upper Floor takes Kink well beyond what its other sites accomplish and proves the company has its sights set on more advanced forms of entertainment. That said, there are some improvements that could be made here: a 1080p video upgrade, for example; improved navigation features to guide users to their desired content much more quickly. The action is less fluid and intense than most other Kink sites, but it's not like the Upper Floor subs get it easy, either. Quite the opposite, actually, as they're run ragged trying to meet the demands and obey the orders (and suck the dicks, lick the clits, finger the asses etc) of their masters. This all makes for wonderful live entertainment and, although it loses some of the impact when not viewed live, archives scenes are almost as epic as the day they were shot. The Upper Floor won't be for everyone - in fact, it's even hard to describe in terms everyone will understand; better to check it out for yourself - but those aligned with its elaborate, ornate, and utterly depraved style will be overjoyed at the chance to join.