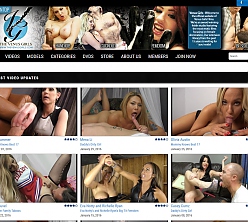 Porn's reputation has it that the male performers and behind-the-scenes crew dominate the women in every imaginable fashion: economically, sexually, socially, and psychologically. Take one look at the ball-busting, bi-forcing bitches of The Venus Girls, though, and you'll see right through that stereotype. The Venus Girls places you at the mercy of dominant women eager to get you all worked up, just about to explode, then kick you square in the balls, insult your dropping cock, and stand high above you demanding to be worshiped… Now, isn't that something we can all get behind?

Overview:
Maybe you have zero self-control, lack discipline, but you'll learn, you will learn. The Venus Girls insists upon it! Home to some of the adult industry's most demanding, insulting, and abusive women, The Venus Girls takes you deep into the sordid dungeons of the Porn Purveyors, the folks behind this haven of hedonist babes eager to exert their influence and control over you, their at-home-viewing submissives. The Venus Girls claims to hold fifteen years worth of top-quality female domination starring pornstars and amateurs from Olivia Austin, India Summer, and Alura Jenson to homegrown hotties you've never seen before (and likely never will again). And, with 'your' cock in their tight fists (courtesy of a POV camera), or the toe of their stiletto rushing towards 'your' balls, you'll really feel compelled to obey your new sexual overlords, The Venus Girls, whatever they demand of you. Suck that guy's dick like the budding gay bro you are? Woah! The Venus Girls pushes the envelope, that's for sure, but whether it pushes to too far for you is something you'll have to decide for yourself. Whatever the result, you can rest assured The Venus Girls is aiming to devastate and destroy you sexually… in the most enjoyable fashion possible, that is!

Deuxma, Claire Dames, Siri, Angelina Valentine, Mena Li, Noelle Easton, and Christie Stevens are among those women throwing their erotically-charged aggressive tendencies behind each Venus Girls encounter. Sky Taylor beats the meat of many a guy, India Summer cuckolds her new husband, and little Jessie Palmer paddles, pounds, and penetrates her fella's asshole, all in the name of controlling her wimpish sex slave.

Instead of paying the standard $29.99 monthly membership fee, Mr. Pink's readers can now enjoy The Venus Girls and its 447-scene archive, updated at least once a week, if not more often, for only $9.99-a-month. If that doesn't convince you to throw yourself into The Venus Girls' ball-busting grip, what will?

Cons:
Some women appear on the model roster but cannot be found in any listed scenes or updates. Penny Flame is one example of a highly desirable (and now-retired) babe that would no doubt bring a few new members to Venus Girls HQ. Well, she would if she was more than a thumbnail marker.

Design is weak and unprofessional, much like design of The Venus Girls' DVD covers themselves. The shooting style is also far from world-class, often rendering exciting scenes in dull shots and sequences that don't feel particularly well-crafted, however sexually, vicariously impacting they might be.

Obviously up-converted from SD to HD resolutions, The Venus Girls' videos aren't as brilliant as their "HD" labeling would suggest. Colors often appear drained and dull, sound can be muffled or distant, and resolutions can and do shift from HD to SD and back up to HD again from scene-to-scene, with no text labels to show the precise resolution of your chosen video.