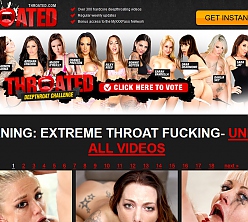 Pros:
It takes a daring woman to impale herself orally on some of porn's biggest, stiffest dicks, giving themselves over his pleasure, but with a cast that includes Samantha Rone, Anna Bell Peaks, Aria Alexander, Luna Star, Cassidy Klein, and two of today's hottest new cocksuckers, Kalina Ryu and Priya Price, you're guaranteed some seriously racy oral-only action here.

After a brief introduction that gives viewers a chance to ogle the starlet's figure as she tempts and teases via the camera, things start getting wetter and messier with the girls opening their mouths wide for Throated's big cocks and extremely deep dicking. Many girls end up teary-eyed or spit-covered and some gag and choke themselves almost to the point of puking; these ladies are Throated queens!

Photo galleries may look vibrant, colorful, and quite clear here at Throated, giving viewers a good chance to ogle their favorite ball-drainer as her eyes well up, her mouth falls open, and she slides her tongue against the bottom of his shaft while forcing her own head into his lap. They would, however, look much better in resolutions larger than 1920px.