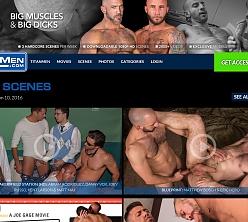 Overview:
The Ancient Greeks certainly had a way of weaving mythologies in the most intricate and involved fashions, all to attempt to explain things their meager understanding of the physical world could not. Among their celebrated deities were Titans, the second highest class of beings and direct descendants of the primordial deities. The children of Gaia and Uranus, gods of Earth and sky, the Titans ruled the Golden Age until overthrown by Zeus, Hades, and company. The website under assessment today by yours truly doesn't deal with gods, not exactly. Titan Men offers nothing more than some of the finest all-male hardcore around, starring guys more ripped and rugged than the twink-filled gay sites of yore, rendered in High Definition video downloads and streams, and weekly updates to keep your flame a-burnin'. Usually charging its members $24.95 for one month's access, Titan Men is already feeling like a high-end premium porno service. Will that feeling remain or will reality (and disappointment) set in and threaten the fun to be had at this hot 'n' steamy, leather-daddy-filled, grey-fox-featuring all-male wonderland? Only time and Mr. Pink's can tell, folks, so let us gaze up at Titan Men and sit in affectionate judgement of their style, their sex, their spewing dicks. How does a site boasting movies like Taxman Cumeth, Like Father… Like Son, and Men's Room: Bakersfield fare in this day and age? Come on, Titan Men, show us what you got!

Cons:
If you find yourself thinking Titan Men looks a little dated, that's because it is. Many updates contain not freshly-shot footage but older works either tossed directly online or remastered in some fashion. Many scenes appear to be SD sources unconverted for fake 1080p streaming. Other scenes are genuinely HD and look great.

Titan Men is part of a loose network of gay hardcore sites that also includes Titan Men Fresh, Rough, and Joe Cage Men. Unfortunately for Titan's members, none of these sites are included as bonuses or network packages. All your Titan Men membership buys your way into is TItan Men. (And, hey, that's not too shabby at all!)

As recently as January of this year, a download limit in place at Titan Men was reported by various users. Apparently keeping you to no more than twenty saved files in one 24-hour period, this download limit doesn't appear to be around any longer, though no mention is made of it anywhere by Titan's web crew.

Dealing in basically one kind of guy - a rugged, barrel-chested, hirsute and tightly-muscled guy approaching middle-age, or at least about to enter his mid-thirties - and if that guy doesn't do much for you, you won't find much point to joining Titan's ranks of members. Twinks, pigs, femmes, drag queens, and straight boys are rarely found here.

Conclusion:
Based on its lofty name, you might have expected Titan Men to slay all competitors with its divine gay hardcore. Instead, this infamous studios puts in a solid if unremarkable effort and delivers a site that, though hardly flawless, should bring many subscribers many hours of steamy entertainment. Although the update schedule remains somewhat unclear, it is clear that many recently added scenes were produced years ago and either fail to reach HD resolutions or seem to get there by upconversions. All that said, when it comes to the sex, the most compelling reason to hit up Titan Men's homepage, this archive has a ton of raw, wild fucking to bring you. An archive of more than 2,500 scenes gives you a decent range of scenarios, if little choice of men, and features everything from gangbanged schoolboys and athletic guys experimenting to romantic lovemaking, public sex, and behind-the-scenes clips. It's this archive that gives a Titan Men membership such appeal.