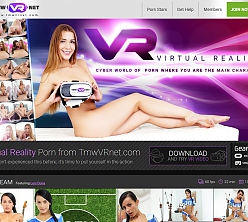 If, like most people, you're getting pretty sick of reality, why not step into the remarkably inviting world of virtual sex with European teenage sluts! Teen Mega World Virtual Reality (or TMW VR for short) may be a fairly new arrival to the Teen Mega World network but it's already making an awesome contribution, bringing point-of-view Ultra-HD VR sex scenes that put you (via your Oculus Rift, Gear VR, or smart phone) in the fantasy fuck seat. With such hardware-reliant content, TMW VR won't be fit for everyone, but those after sexy European teens straddling their (surrogate) dicks in immersive virtual reality, already TMW VR has plenty to offer.

Overview:
Teen Mega World has been delivering a heavy slate of High Definition European hardcore for over a decade and now the latest addition to its roster of sites boast the latest in new audio-visual tech: virtual reality. Teen Mega World VR (TMW VR) boasts not only virtual reality movies ready for viewing on your Oculus Rift, Gear VR, or smart phone devices but also 30, 50, and 60 frames-per-second videos and awesome Ultra-HD clarity. But what does it show in all its tech-savvy glory? Nothing but the finest, most committed and compelling Euro pornstars staring directly into 'your' eyes as the straddle a mystery dick and ride themselves (and most likely you) to a very pleasant climax, of course. From bondage and leather to teens in tutus - there's even a god damn Pikachu - TMW VR has a small but well curated selection of intimate virtual sex experiences ready to be strapped in front of your eyes and beamed right into your most powerful erogenous zone. The cost each month to you the member runs $29.95 but, part of the huge and hugely exciting Teen Mega World network, TMW VR will likely dazzle you with its futuristic virtual sex just as the rest of Teen Mega World dazzled you with its awesome teenage Euro sluts.

Alongside the obviously exciting VR videos sit photo galleries that offer surprisingly strong pics in online arrangements and zipped sets of 3500px resolutions. Happy with the 3D offerings, TMW VR leaves members to make good use of the very-much-2D photos. Some 3D galleries would be great to see here, but only if they support the excellent photo options now in place.

If you become a member of TMW VR you'll immediately notice upon logging in that you're given access to the entire Teen Mega World network, all 42 sites, without restriction. At $14.95-a-month with Mr. Pink's current deal, you can enjoy a plethora of fine Ultra-HD and HD Euro-porn both 2D and 3D for a truly affordable price.

Not all Teen Mega World websites are currently active. In fact, many have fallen off the update schedule and now seem like relics of porn's past trends. Will TMW VR eventually join these sites in the TMW graveyard or will it become the next No Boring, a consistently thrilling and very well stocked flagship hardcore site of this teen-fucking Euro network? Let's hope for the latter.