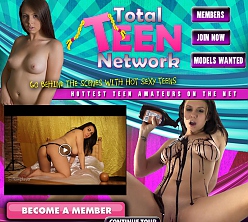 They're young, they're fun, and they'll soon be smothered in cum! They're the flirtatious fillies of Total Teen Network and they're here to dazzle you with their amazing pornographic performances. Well, they'd like to, but Total Teen Network is far from the complete or perfect package. Promising HD content and delivering, well, some, this network (which, really, is a single site) relies heavily on its hot amateur models to win over new fans. Are you one such fan, willing to sacrifice a little convenience and clarity for your favorite budding starlets? Then, dear reader, let us continue into the heart of Total Teen Network.

Overview:
It could be argued - and, in fact, has been many, many times by many, many people - that younger women are inherently more appealing than middle-aged or older females. Their wombs are more fertile and accepting of that other required procreative component, their bodies able to better handle the demand of pregnancy, and, well… they're usually a lot more fun that more serious-minded women in their 30s and above. Face it: if you want a woman who's as eager for activity and adventure as you are, you'd better aim for the high-teens, low-twenties. Total Teen Network features twenty-somethings, yes, but don't let that dissuade you from checking this site out! Total Teen Network claims to "Go behind the scenes with hot sexy teens," with "High Definition photo galleries as well as hours of videos." Ok, so that's not the most incredible set of tour page boasts, but it's not exactly clear either. The tour page frankly gives little away, simply showcasing a few of Total Teen Network's super-sexy young babes and inviting you to sign up for a $29.95-a-month membership plan. Is such a subscription going to keep your cock hard and your eyes glued to Total Teen Network or is this mysterious collection of college-aged cunts 'n' cuties just another of the few thousand forgettable "teen porn" sites littering the Internet? Mr. Pink is on the case!

Cons:
From a very dated HTML template, Total Teen Network's web design and navigation system aren't exactly cutting edge. In fact, without a revised, reimagined, and reinvigorated members area, this site runs the risk of seeming well and truly stuck in the late-90s, early-00s. And that's not very attractive.

Having only been online since early 2015, it makes perfect sense that Total Teen Network would still be quite small. But, with just 56 videos and 120 galleries online, this "network" isn't even large enough to be a well-stocked single site. The update schedule is busy, yes, but since all this content was clearly shot years ago and is only being upconverted from SD to 1080p HD, there could (should?) be far more to enjoy here.

Photo galleries generally reach 1600px both online and via zipped downloads. In addition to this resolution being on the low side, many galleries contain not photographs but screencaps pulled from the corresponding video. And don't get too excited about the 1080p videos either, as they're almost all upscaled from Standard Definition sources.

Some of the content featured at Total Teen Network is obviously neither original nor exclusive to this site. Watermarks on some images point directly to the site of their creation. Hell, some photo updates aren't galleries at all, merely single promo images pointing you to join another teen-heavy site.