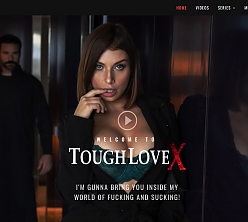 Alongside Charles Dera as Karl Toughlove, members will see notable nut-busters like Sofi Ryan, Eliza Ibarra, Gia Derza, Mercedes Carrera, Abby Lee Brazil, Lena Paul and Kendra Spade take on the big man himself. Models are given profile pages with brief bios and personal stats but mostly we learn about them from the scenes themselves. Limits are pushed, smiles are shared, and plenty of girls return for round two.

ToughLoveX hasn’t been online that long and so has made only 60 updates. Thankfully each scene tends to offer a range of environments and sexual scenarios, making for compelling and entertaining viewing. New content lands here every Thursday and brings both videos and photos to the archive. Now discounted to $9.95, one month inside the sick, sordid world of Karl Toughlove might have a permanent effect on you.

All video download options show their resolution as 1920x1080 regardless of what frame size is delivered upon request. You can more or less guess what the resolutions will actually be - 2160p, 1080p, 720p, 480p - but even the fact that the top resolution hits 4K is left out of the video option text.