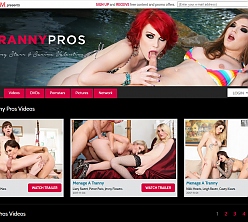 In desperate need of a trans-porn site that delivers high-quality hardcore with minimal fuss and maximum heat? From the deviant minds at Devil’s Film comes a trans-tastic endeavor guaranteed to have you ogling its dick-equipped babes ’till the cows come home. Tranny Pros promises “transgender prostitutes,” but really delivers a parade of today’s finest trans-pornstars in semi-exclusive scenes that pair them with women, men, and other trans-beauties for incredibly versatile fucking entertainment. In 1080p HD streams and downloads, Tranny Pros excels where so many other trans sites have faltered and failed before them. Excelsior, Tranny Pros!

Overview:
Gone are the days\ when trans adult performers were relegated to low-rent productions and given no hope of sharing the spotlight of the AVN Awards. With some of the hottest, fastest-rising stars of today trans-women on board and ready to dazzle you with their advanced sexual techniques and abilities, Tranny Pros makes a bold claim on every porn viewer, whether they be female or male, straight or gay, confirmed or questioning. Will you finally relent and let yourself enjoy some salacious gender-bending adult entertainment or stick to your heteronormative guns and deny yourself the fun? Tranny Pros and its epic archive of (somewhat) exclusive HD hardcore should have any curious party throwing down the required $29.95 monthly fee and entering the front door (or back), genitalia in hand, ready to explore. Tranny Pros - which, incidentally, as close to confirms that all appearing performers either are prostitutes or are playing them - promises frequent updates, 1080p HD viewing, free network access to Devi’s Film’s many other efforts, and a truly unique hardcore experience involving porn’s mildest, most adventurous, and most under-appreciated queens of cock!

Pros:
Sporting a killer roster of trans, male, and female stars all sharing their bodies gleefully with each other and their salivating audience, Tranny Pros celebrates trans stars Nadia Love, Juliette Stray, Natalie Mars, and Chelsea Poe (among many others) and manages to include lusty, adventurous women like Kacie Castle, Alana Cruise, and Leigh Raven.

New scene updates hit Tranny Pros about every two weeks. While this isn’t the greatest schedule around, it does keep the site growing from its current 649-scene size. Each new update brings High Definition video streams and downloads to all members and, at peaks of 1080p, videos look very good indeed. Clear images capture the awesome trans-models beautifully, a style carried over to the exclusive photo galleries.

All Tranny Pros subscribers receive one epic bonus for their patronage: free access to the entire Devil’s Film network, all eight sites! And, now discounted to only $14.95-1st-month, Tranny Pros is much more affordable than usual, and more affordable than many top competitors. If you’ve wanted to explore the blossoming world of trans-porn, this is a great opportunity.

With Devil’s Film accessible through Tranny Pros, and with other company networks on the periphery, it can feel like Tranny Pros is being underserved. Surely there’s been a large enough explosion of interest in trans-smut for this site to push ahead and produce two-or-three-times what it was releasing a few years ago!

If you’re eager for some trans action but don’t want to be stuck with ridiculous “OMG! I had no idea she had a dick!” scenarios, Tranny Pros may rub you the wrong way. Where are the exclusive DVD series entitled “My Tranny Girlfriends Picks the Best Snuggling Movies,” or “Perfect POV T-Girlfriends”?

Conclusion:
Sure, it ain’t exactly a mountain in size and its hyper-versatile content won’t suit trans-porn purists, but Tranny Pros delivers a small yet powerful collection of trans-hardcore well worth a closer look. Updates arrive at the sluggish rate of about two-per-month but they bring with them high-quality photo galleries reaching 1920px online and in zipped sets, and excellent 1080p video streams and downloads (along with other smaller formats). From three-way sex starring two strap-on equipped lesbians and a foxy trans girl to bisexual gangbangs that see three or four guys take on (and drain) one awesome trans starlet, each Tranny Pros update is loaded with transgressive lust and impressive physical arrangements of all kinds. Options to exclude certain kinds of content from your search and browse results - cis men and women, in particular - make an easygoing environment even more enjoyable to use, while access to seven additional Devil’s Film websites make a good idea a trans-fan’s ideal porn scenario. Well, damn close to it, anyway.