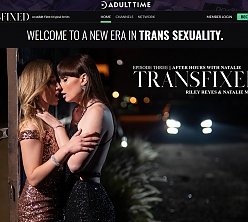 Overview:
The rights of trans people may now be a hot topic among the political pundits, pseudo revolutionaries, and far right radicals but it’s hardly a new issue. Even porn, for all its lack of true sexual adventure and embracing of sexual variety, has embraced trans performers like never before, and started doing so a few years back. One brand new adult effort focusing on lavish glam-porn encounters between cis women and trans-women offers scintillating hardcore sex that pushes some serious boundaries, hits hot button issues of the day, and, most importantly, serves up brilliantly hot entertainment. Charging $29.80 for entry but promising not only the hottest and most exclusive trans-porn on the ‘net today, but extended access to a massive and continually growing network of hardcore delights via Adult Time. Transfixed’s distinctly awesome trans hardcore sees the hottest T-models throw their cocks into porn’s most adventurous and least prejudiced female stars. Will this tantalizing site prove as transgressive as we at Mr. Pink’s hope? Let’s find out!

Pros:
Presenting its unique sexual content in a lavish, highly ornate style that blends realistic scenarios with fantastic atmosphere and adventurous yet romantic sex, Transfixed is easily the most stylistically accomplished trans-hardcore site out there. Showing reality-based situations in which trans-women seduce or are seduced by foxy cis women, Transfixed’s content packs a hell of a lot of heat.

Looking utterly gorgeous in HD and UHD formats, Transfixed’s epic hardcore encounters may start at crowded parties or in a costumed trans-warping of the Red Riding Hood story but they all end up in roughly the same place. Streaming and downloadable 2160p videos showcase the immense lust evident between performers as her cock meets her cunt and both erupt in ecstasy.

Anyone joining Transfixed is buying themselves access not only to this ground-breaking trans-erotica site but to an extended network of 10 Adult Time original sites and another 130-something channels providing a range of smut from acclaimed and amateur studios and producers. Discounted to $14.95, your first month inside Transfixed is offered at a bargain rate.

Cons:
Any new site or network is bound to experience hiccups as it finds its footing. The Adult Time network that hosts Transfixed has been online for many months but still stumbles and falters from time to time. Both Chrome and Firefox identified unique bugs when used to browse Transfixed and these bugs extend to the rest of the network. Thankfully, they’re not total boner killers.

Transfixed is very new. So new, in fact, that even the most forgiving viewers will likely find it really fucking bare bones. Without the additional network access, it’s unlikely Transfixed would earn many subscribers at all. There’s so much held across the network, though, that a membership is not only worthwhile, it’s a bargain!

The trans-woman and cis-woman pairing is easily porn’s most commonly featured trans/cis combination with trans-men and cis-men getting little love outside the gay world. The very premise of the site suggests things may open up at some point in the future and allow for more comprehensive gender bending transgressive viewing.

Conclusion:
Clearly any site with only three available scenes is going to be a tough sell but Transfixed is inarguably a true porn original, and instant classic, and a momentous occasion for its trans stars. The three scenes on offer showcase a variety of concept and execution while remaining elegant and carnal throughout. The marvelous visuals of Ms. Mills are delivered in excellent 4K videos that prize atmosphere along with explicit detail of the brilliantly lustful sex. The network access granted to subscribers is obviously a massive score with hundreds of sites opening the doors to thousands upon thousands of scenes from world class creators. Transfixed could certainly use a much stronger update schedule but with quality both visual and sexual this high, the lengthy production times are completely understandable. There’s little else to say about Transfixed lest I sit here gushing about specific shots and the scorching hot pairing of Kleio Valentien and Chanel Santini, but this is one trans site with such broad appeal and such stunning content you really should just go see it for yourself.