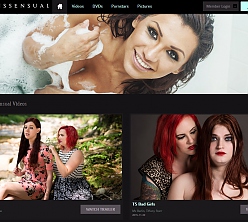 For a long time, many transsexual sex workers have been relegated to working in the dingiest of hotels, motels, and porno studios for the most unsavory of employers. Now that TransSensual has unleashed its highly sophisticated narrative-driven trans-porn on the world, things are looking much brighter. High Definition videos and high-res galleries showcase Jessy Dubai, Sunday Valentina, and many other top trans beauties as they show off their incredible bodies and display their huge lust for cock, pussy, and whatever else stands between them and total sexual fulfillment. Joined by a cast of men and woman pulled from porn's top ranks of kinky deviant fuckers, TransSensual is the most promising trans studio to appear in a long, long time.

Overview:
The rights of lesbian, gay, and bisexual people have finally garnered the kind of public concern they deserved all along, but, queers aside, the LGBTQ designation still has one group that's struggling to receive the kind of reluctant welcome given to, say, our flamboyant gay male television stars. Transsexuals, whether pre or post-op, male-to-female or female-to-male, still find themselves outliers in the realm of human sexuality. Misunderstood for centuries but now circling acceptance and respect, many trans people are stepping out into the spotlight, some using porn as a vessel. TransSensual, a trans-focused hardcore effort from Gamma Entertainment, proves to be one of the most ambitious trans-porn studios to come along in many years. Ditching the standard wham-bam gonzo plan to instead craft compelling stories and character who don't just start fucking out of nowhere, they actually have motivation for their lust! High Definition videos bring viewers all the gender-bending action in 720p and 1080p formats rich with shadow and darkness, but never letting the sexy trans stars disappear into the background, TransSensual is a visually powerful take on trans-hardcore of all three varieties: trans-and-woman, trans-and-man, trans-and-trans. Charging its members $29.95 for access to its growing collection of largely exclusive porn, TransSensual is bound to entice many long-frustrated trans-fans into finally throwing down some cyber-cash and indulging in one of the most accomplished trans sites around.

Pros:
Not only are porn's stiffest (and least homophobic) men stopping by TransSensual to shoot with trans performers, but those trans performers are among the best and most popular on the planet. Jessy Dubai, Venus Lux, Aspen Brooks, Sunday Valentina, and Savannah Thorne take the lead and present their feminine figures and throbbing cocks to the visiting guys for some steamy fucking.

Taking a more sensual approach in most cases, Dana Vespoli, Heather Vahn, Sarah Vandella, and Sovereign Syre also stop by to suck, fuck, and generally mess around with the trans starlets and their cocks 'n' holes for some seriously seductive (and sometimes confusing) viewing. Rendered in HD formats of 720p and 1080p in both streaming and downloadable videos, and with 1920px photos in online galleries and zipped sets.

Updating about once-a-week, TransSensual seems to be growing to an even more surprising and impressive size than its featured TS starlet's cocks. Recently adding its 100th scene and 150th photo gallery, TransSensual delivers a good slate of freshly produced trans-porn that's heavy on romance, passion, seduction, and chemistry as well as the usual physical tricks and traits.

Cons:
TransSensual is growing, yes, but it's still not particularly large. Updates don't appear to be too strictly scheduled and could use some tightening. The lack of bonus video feeds or network access to other sites is also something of a disappointment. There's plenty of options within Gamma Entertainment that'd keep subscribers happy with some free fucking gifts.

While the 1920px images online at TransSensual offer some strong views and decent levels of detail, an even higher resolution, say in the 3000px or 4000px ballpark, would easily push this site even higher up the trans-porn rankings. Still photos can be just as arousing as videos, especially when unique physicalities are on display as they are here.

Although it gets you inside for half the usual price, the current TransSensual discount offer available from yours truly will only last your first month as a member. After 30 days you're left to pay full price or sign up for a multi-month deal at a modest discount. Hey, a half-price month is nothing to sneeze at, folks, but it is a limited deal.

Conclusion:
I said at the outset of this review that TransSensual showed promise and potential. I lied. TransSensual once showed these qualities but has now fulfilled its promise of hosting a solid archive of more than 100 scenes and 150 galleries, each item hell bent on showcasing the sexual variety and value of today's excellent trans performers. Shot in HD and delivered to subscribers in 720p and 1080p MP4 streams and downloads, the evocatively shot visuals add tension and atmosphere to the already charged scenes. Pairs of trans-women can be seen enjoying each other just as often as they can be found inside the likes of Dana Vespoli and Heather Vahn or guys like Andrew Fitch and Vadim Black. It's honestly pretty refreshing to see performers so obviously turned on by the somewhat rare opportunity presented to them and this makes for thrilling viewing more often than not. Jessy Dubai here proves herself on par with any cis pornstar working today and makes a case for integrating the AVN Awards for Transsexual Performer of the Year with Female Performer of the Year. If the Louboutin fits...