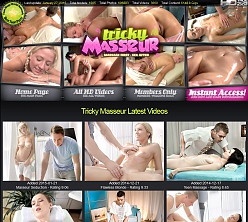 Overview:
There are untold numbers of ways men craftily position themselves to take sexual advantage of women, lording over the fairer sex their higher wages, greater political influence, or physical dominance, all just to get a piece. There are women who flip this situation on its head and instead use what is known as "the feminine wiles": the moves they make and the way they present themselves that intoxicates a man's mind and libido. Tricky Masseurs sees these two power-play scenarios combine in one hardcore encounter. A Euro-shot massage-porn site that's heavy with a romantic atmosphere and loaded with gorgeously smooth-skinned Eastern European babes, all of them young, fresh performers whose sensual touch is met by the strong, commanding hands of their increasingly stiff partner. Part of the Teen Mega World network, which is also home to such sites as X-Angels, No Boring, and Teen Sex Movs, Tricky Masseur offers High Definition videos, high-res photo galleries, and updates arriving every four days. And, at $29.95-a-month and with such sexy young lasses all laid out on massage tables, covered in sensual oils of ylang ylang and jojoba, their bodies looking finer than fine, Tricky Masseur is bound to thrill anyone into female body worship, young Euro sluts, or romantic sex shot in a sensual style and atmosphere.

Pros:
The girls of Tricky Masseur are fit-bodied, smooth-skinned European beauties, all appearing to be in their early-twenties or even late-teens. Blondes, brunettes, and redheads, and both busty and flat-chested babes lay themselves down on a massage table and allow their masseuse's hands to wander between their thighs, across their nipples, and eventually inside their warm snatches before reaching for his cock and starting to reciprocate.

Cons:
Although videos can be downloaded in both 1080p and 720p resolutions, streams are limited to 960x516 pixels. The streams look good, don't worry about that, but it would be great to see them available in HD so those of us with more powerful computers and connections can indulge in a little extra detail without being forced to download.

Updates are arriving at Tricky Masseur every four days. Well, they were up until the most recent addition, which arrived a full month after its predecessor. Is this the beginning of a new, slower update schedule or just a temporary setback that'll soon be corrected? Let's hope it's the latter.

Most every scene shot for Tricky Masseur follows the same plot and progression of activity: girl enters the room and takes her place on the massage table before the guy applies his hands to her body and gradually turns her on so much she starts giving or receiving oral; they then progress to sex… usually still on the table.

While it's not an especially large site, Tricky Masseur sure could be a lot easier to navigate. As it stands, the lack of a keyword tagging system and category index leaves members with almost no worthwhile navigation controls that don't involve clicking Forward and Back arrows