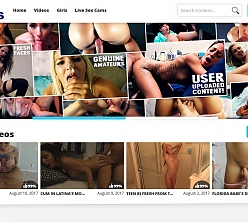 Pros:
Sex tape-style hardcore encounters with flaming hot women of all physical types and personalities (barring BBWs and other outliers) is what True Amateurs is concerned with. Largely shot in bedrooms and hotel suites, though with some bathroom/shower scenes and sofa-based romps, many of the scenes feel quite intimate and affectionate with lots of flirtation and teasing.

Shot in HD and delivered here in a fairly wide range of bit rates, the streaming and downloadable videos come in at 720p and 1080p resolutions in almost every case. New video updates arrive on True Amateurs’ homepage weekly, every Wednesday, and there’s a handy list of Upcoming content complete with video previews to whet your appetite.

True Amateurs is updating every week, which is great, but it’s also painfully small. With only 17 scenes currently available and no photo content at all, members don’t really get that much for their money. Expanding members’ access an archive of bonus or networked content would help ease the pain and amuse folks while they wait for a solid size increase.

Almost every scene held here has been rated 99% by the fans. Or, at least, it appears that way. There seems to be almost no genuine fan interaction here, which isn’t exactly surprising, it’s just another indication that what’s presented by True Amateurs is neither amateur or true.