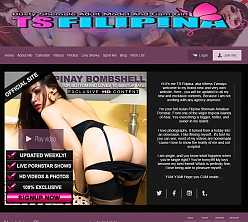 Overview:
Everyone Filipino I've ever known was a woman. I don't know why it worked out that way or why i never met their brothers, cousins, or fathers, but never having known a Filipino man hasn't really bothered me up until this review of TS Filipina popped up on my schedule. See, the subject of this site is Vitress Tamayo, a male-to-female transgender model born and raised in the Philippines and now showing herself to the world, fully exposed and hyper-sexual, via her TS Filipina site. Broadcasting her sizzling seductions live via webcam, shooting intimate galleries in picturesque locations (or the shower), and shooting all kinds of kinky little video clips for her devoted, adoring members, Vitress welcomes all curious new fans and veteran TS-lovers alike to explore her previously private and undeniably sexy world. Getting inside Vitress's site will cost you $25-a-month but with teasers and previews luring you in to check out this versatile masturbation-loving minx as she sucks and fucks her big-dicked friends and demonstrates the variety of impressive ways she gets herself off. A sexy little dynamo who's always eager to please, Vitress (who's usually called TS Filipina here, oddly enough) is a stunning, saucy babe with a stiff dick, ample curves, great cock-sucking-lips and a very good chance at claiming your time, money, and attention - if only you'll let her.

In her photo updates, Vitress poses on sunny beaches, sliding a beer bottle into her ass, shooting some hoops in a Spurs singlet, posing above the glistening Manila skyline, and slutting it up with her shemale girlfriends. Images reach 1500px both online and in downloadabe zipped sets.

Videos are High Definition and can be viewed at 720p or 1080p (though the latter option is sometimes absent) either in online streams or via MP4 downloads. Videos generally offer good detail and reasonable sound, though, as they're semi-amateur productions, some improvements could easily be made.

An small collection of live webcam shows has been archived here for paying members, letting them peek in on Vitress as she lounges at home, suns herself by the pool, and otherwise bides her time before getting outrageously sexy. There's also a Wish List, Tipping tools, and a blog to keep fans busy.

Cons:
Holding just 51 regular videos, nine archived cam shows, and 18 photo galleries, brand new site TS Filipina hasn't had time to gather a truly impressive archive. Updates don't appear to be made on a regular schedule but there has been quite a lot of activity here lately.

Photos peak at 1500px and are badly beaten by many, many competing sites with images surpassing 3000px. Two galleries in particular seem to have been shot on an early-model iPhone and feature blurred pixilation that decreases detail all over.

TS Filipina isn't the only site posting this charming TS's sexy content, there's also a self-titled site operating as 'Vitress Tamayo' and apparently hosting exclusive content not (or not yet) offered to members of TS Filipina, nor is multi-site access on the cards.

She goes by three names, this performer: TS Filipina, Vitress Tamayo, and Besos. Which is her actual professional name, I cannot tell. For a solo site, TS Filipina leaves a lot unknown about its star performer, like her social media account info. "I blog, Twitter, Youtube, Facebook, and Tumblr, and more," says Vitress, though links to her accounts are not provided.

Conclusion:
Vitress Tamayo is definitely one of the sexiest trans-women to make the leap from everyday life in the Philippines to the most sexually explicit parts of the World Wide Web, and we should all be glad she's now online at TS Filipina. Strangely enough, another site exists, operating under Vitress's name and apparently offering exclusive content. Unfortunately, especially for members of the very small TS Filipina, access to the Vitress Tamayo site seems unlikely. To make the most out of TS Filipina, you'll have to be content with the brief flirtations and stripteases, the masturbation and self-pleasure sessions, and each hardcore encounter members currently have access to. It's a small site, sure, but there's lots of promise here and one incredibly sexy Filipina trans-babe ready to dazzle you and drain you. Surely that counts for a whole lot of something!