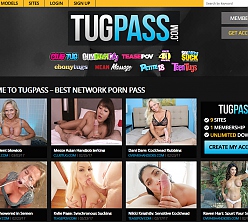 Desire: it tugs at your motivation, pulling you towards the promise of pussy or even just light fondling, leading you astray and dominating your decision making processes. Desire also tugs, very nearly literally, at your pants, reminding you that your oldest friend won’t shake himself into ecstasy. Tug Pass aims to satisfy your desire for porn and your dick’s desire for attention all in one fell swoop. With nine websites devoted largely to hand jobbery of the finest form (but with some oral antics and pussy-pounding action thrown in, too) and a throng of HD episodes starring porn’s boldest and most bad-ass MILFs, teens, and legends.

It seems new scenes lands on one Tug Pass site or another at least three times each week. There’s enough new content being added to ensure even those who tear through the 1400-scene-plus archive already available will keep finding more reasons to return to Tug Pass. Now discounted to just $14.90, your first month inside this HD stroke-fest is more affordable than ever!

Making your way around the Tug Pass network is, well, almost impossible. After choosing the first site on which to focus, you’ll find yourself unable to see scenes featuring specific performers held on another Tug Pass site. The complete lack of cross-network navigation tools is a major drawback to Tug Pass membership.

Much of what’s being added to Tug Pass’s sites of late seems to be recycled from earlier productions. Whether these scenes offer new edits with unseen footage or simply repost something from two years ago as if new isn’t easy to determine. The age of some content, however, is. Dated styles and pre-HD video give the game away.

Conclusion:
As you roam around the Internet looking for something to bring your member to attention, Tug Pass tries to convince porn fans of its own unmissable smuttiness. Unfortunately, with the most exciting content on this network being handjob-heavy, and with many missteps threatening to bring down the overall experience, Tug Pass could use a little bolstering. New scenes arrive fairly often here, about three times weekly, but browsing the different sites and archives is no breezy treat. Many scenes also appear to have been revived from earlier shoots and releases, falling short of HD resolutions and showing a clearly different style from years back. When Tug Pass hits its target, it’s a fairly unique thrill and a pretty pleasing one at that. When things go a little askew, though, it’s a reminder that Tug Pass is still about 65% of what it could be