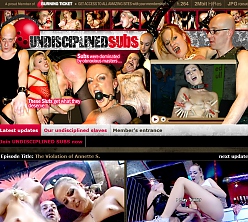 Overview:
Sexual partners come in all shapes and sizes and psychological states. A consistent favorite among lust-filled males is the devoted slave, the submissive girl in need of the firm hand of discipline, the exact kind of woman no doubt drawing you to Undisciplined Subs. Part of the notoriously vicious kink network Burning Ticket, Undisciplined Subs focuses entirely on women so submissive they'll allow their masters to chain and restrain them, torture them physically and verbally, and use a wide and terrifying range of implements on their debased, humiliated bodies. What fun! Tour pages show women writhing in a mixture of pain and arousal, hot wax now hardening on their nipples, clamps attached to their labia, sly smiles creeping across their faces as their masters pull back for another whack of the paddle. Undisciplined Subs won't take advantage of your willingness, though, and charges $24.95 a month for access to both this site and its parent network, but will it scratch your very particular sub-adoring itch?

Photo galleries host surprisingly detailed images that can be viewed online, in automated slideshows, and in downloadable zips, each container delivering 3000px shots that look clear and (again, surprisingly) clean, poorly lit dungeon sets and all.

Mr. Pink can now get you, dear reader, inside Undisciplined Subs for a meagre $19.95 per month, saving five dollars of the usual price. Better yet, that membership pass will also provide you with free access to the other 17 sites operating under Burning TIcket's marquee.

Cons:
Undisciplined Subs' videos don't make quite the impact its photo galleries do, reaching a peak resolution of just 720x576 pixels. While most other self-respecting adult websites are hurtling into a full HD commitment, Undisciplined Subs seems comfortably stuck in the recent past.

Making your way around around both site and network can be a chore. Navigation tools like the search engine and category tags don't provide especially narrow results, leaving you to whittle down the results to something more appealing.

Sprechen sie Deutsch? Nein? Then you're fucked, dude! The vast majority of Undisciplined Subs scenes contain German dialog and will be unintelligible by English speakers. No subtitles or translations have been provided.

Conclusion:
As one of Burning Ticket's larger sites, Undisciplined Subs should also be one of its more impressive sites. While those eager for original German BDSM productions that see the woman relegated to a slave role will surely be pretty pleased, others are likely to leave Undisciplined Subs confused and disappointed. Most dialog is in German and has not been translated or subtitled in English. Videos do not reach HD resolutions, instead peaking at 720x576 pixels and looking, I'm afraid, quite drab and certainly not as strong as the 3000px photos they're attached to. The scenes themselves are of a routinely high quality, however, and incorporate plenty of tools, toys, and implements both intended for sexual use and otherwise. The women writhe in a mixture of pain and pleasure, giving convincing performances throughout and, in the end, that's what matters most.