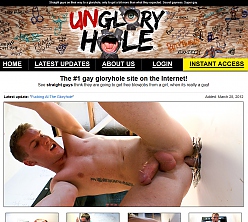 Overview:
The term "glory hole" is actually pretty misleading. Denoting an anonymous sexual encounter between one male and either another male or a female that takes place in two adjacent stalls of a public restroom, adult video arcade, or similar establishment, there's really nothing all that glorious about it. Sure, you either get blown or blow someone, but that's really all there is to it. Sure, you could spin around and have your ass filled, but even then that's about as exciting as glory holes can get. That is, dear reader, unless they become Unglory Holes! Presented by the Big Daddy network, Unglory Hole takes the usual glory hole scene and throws a wrench in the works. The wrench, here a potty-mouthed woman eager to help ensnare the straighties, makes the taped-up holes in the wall seem like a one-way ticket to heterosexual paradise, only to switch herself out for a gay guy who wants nothing more than hetero dicks in his mouth or up his ass. These horny guys fall for it every time! For $29.95 a month, you too can enjoy watching these desperate hetero fools cream the mouths of dozens of homosexuals, all the while thinking they've met their equivalent female glory hole fanatic. Jokes on you, suckers! You just face-fucked a dude, dudes!

Pros:
Talk about an awesome concept! Unglory Hole has taken a fair tired pornographic premise and jacked some new life into its collapsing veins, turning what would have been a pretty mundane site into a hilarious sexual deception prank played on unsuspecting straight fellas. The simple, straightforward execution of the scenes also amplifies the entertainment and ensures Unglory Hole doesn't make too many missteps.

Holding High Definition videos that peak at 1280x720 pixels, Unglory Hole certainly isn't as low-rent an event as the stalls that hold the taped-up fuck portals themselves. You'll not only be able to check out every hunky straight man and slightly less hunky gay guy as their secret, deceptive congress is accomplished, but you'll be able to read all the bathroom graffiti, too!

Cons:
Most of the "straight" guys shown sucking dick and pounding ass at Unglory Hole don't really seem all that gay. Before you go off on a rant informing me that "gay" isn't a personality classification or an assessment of someone's demeanor, take a look at these guys. They're indistinguishable in physicality, behavior, and attitude to the guys whose mouths they're filling. My gay-dar, dear reader, is off the charts!

A strange design issue keeps Unglory Hole from being almost ridiculously easy to use. Tabbed browsing - that is: opening links in new browser tabs or windows - curiously refuses to cooperate across the entire Big Daddy network, forcing you to keep all your browsing in one tab or window. It's not a browser application issue; I checked Firefox, Safari, Opera, and Chrome and all had the same problem, so it can only be part of Unglory Hole's construction.

Unlike most Big Daddy websites, Unglory Hole hasn't yet added any photo galleries to its archives. Instead, all still image fans receive are galleries of screencaps pulled from and accompanying the videos. Not exactly the most compelling images possible, right?

So far, only a few of the sites hosted by Big Daddy have enabled downloading capabilities for their users and I'm afraid Unglory Hole is not one of them; at least, not yet. It seems downloading is slowly being enabled on all sites, so I'm sure Unglory Hole will get there at some point, just not quite yet.

Conclusion:
As is the case with a number of sites on the Big Daddy network, Unglory Hole is a fantastic concept delivered in a streamlined, straightforward fashion. Streaming videos reach 720p HD resolutions and look fantastic, but there are no download options or photo galleries currently available. With more than 100 scenes in the archives and a new one arriving every week, it looks like Unglory Hole is here to stay. If only downloadable videos were online along with high-res photo galleries, it'd be much easier to convince you, dear reader, that your thirty dollars couldn't be better spent. Until those changes are implemented, Unglory Hole must sit where it is. Unglory Hole is by no means a bad site, though - in fact, it's almost endlessly entertaining - it just needs a few tweaks to reach its full potential.