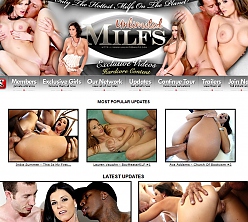 Overview:
Young women are desirable enough as they are, but let them stew a while, gaining invaluable experience and aging to a higher plane of physical, emotional, intellectual, and sexual maturity. Then and only then can a promising young woman truly be said to have blossomed. The ladies of Unlimited MILFs blossomed some time ago. Now in their late-30s, 40s, even 50s, these mature harlots have worked enough young studs to not only know which end is up, but how to blow the minds of every man alive. That, folks, is the benefit of experience and reason enough not to discourage young female promiscuity. (Pfft - as if we needed a reason!) Unlimited MILFs promises on its tour pages to deliver exclusive hardcore content starring "the hottest MILFs on the planet," and to do it often enough to satisfy you, should you pay the required $29.95 monthly membership fee and head inside for a world of lightly wrinkled, slightly sagging, pleasure-administering middle-aged hotties. Will Unlimited MILFs and its allegedly exclusive collection of smutty aunts, moms, teachers, stepmoms, and friends' moms, all of whom seem only slightly more eager for virile young men than they do in lesbian and threesome scenes for each other. Does Unlimited MILFs hold unlimited pleasures? Let's find out.

Unlimited MILFs now offers High Definition videos that can be streamed or downloaded at peak 1024x576p resolutions along with more manageable sizes in a few formats. Photo galleries accompany all scenes and boast around 80 1024px shots each, whether viewed online or zipped and downloaded.

Cons:
Only 22 scenes were added to Unlimited MILFs during the twelve months of 2013. And without a single update to show for itself so far in 2014, it seems like Unlimited MILFs is dying a very, very slow and protracted demise. Hopefully a revitalization effort is just around the corner, because when Unlimited MILFs was firing red-hot it was amazing.

While it's handy to have the option of browsing DVDs here and not only individual scenes, it's quite disappointing to select a DVD based on the cover girl, the cast list, or a trusted director only to find one, maybe two scenes are available, the others having been shipped off to other New Sensations sites where the webmasters feel they'll be more appropriately used.

Conclusion:
First things first: Any site operating under the name Unlimited MILFs shouldn't let itself lapse into numerous periods of inactivity and have nothing at all to show for a year more than a month old already. If Unlimited MILFs were to reinvigorate its update schedule with weekly installments, there's every reason to believe this site could roar to the top of any MILF-related website ranking worth a shit. Until some improvements have been made, though, Unlimited MILFs fails to live up to its potential and even risks embarrassing its parent network a little. That said, seeing India Summer throw herself at the mercy of four fiercely erect guys and be thoroughly worked over before taking in a more sedate Julia Ann scene in which she proves her sultriness and sex-positive attitude have only increased with age, well that's still a highly arousing and very enjoyable experience as offered only by Unlimited MILFs.