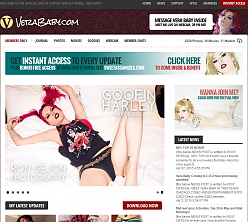 Alt.models claiming to be devoted comic book, video game, and anime fans are dime-a-dozen these days (and so are accusations of inauthenticity), but if anyone is proving that, geek credentials or not, a drop-dead sexy woman into cosplay is about as arousing and exciting as anything any nerd could conjure in his over-extended imagination. On her official website, cosplayer, model, and all-around ideal-woman Vera Baby offers fans private glimpses into her candid photo galleries, the best of her pro modeling photoshoots, and a variety of videos, some shot by pros and others shot by Vera herself, all intended to give geeks something to salivate over. Won't you let Vera Baby be your very own Harley Quinn?

Overview:
I don't quite know when it exactly started, but in recent years women who'd usually be regarded as untouchably attractive have been ditching the jocks and junior execs in favor of guys a little bit geekier than previously understood. Heading to comic, gaming, and anime conventions all gussied up like Morrigan or Mary Jane Watson or Sailor Jupiter, these undeniably gorgeous women have had geek's heads turning wherever they go. Now a few such babes, professional models obviously, have created websites where they, for a price, share photos and videos (and even animated gifs) with devoted fans eager to ogle every cosplay outfit, hear every convention story, absorb every game review, and donate to the cause of keeping their desired beauty in good financial standing. (Maybe I should get myself an Amazon Wish List after all…) One such stunning example of foxy feminine seductiveness is the redheaded, tattooed cosplay-loving poser Vera Baby. On her official self-titled website, Vera poses in sultry, revealing outfits, is photographed by world-class lensmen, and experiments with aesthetic flourishes like in-shower shoots, inventive lighting arrangements, and, uh, wigs. Tour pages list "membership benefits" including high-res photo galleries and videos, live webcam and members-only chats, and "extra bonus goodies" that are yet to be specified. It looks like Vera is a softcore performer with no plans to start slurping up the liquid contents of trio of cocks anytime soon, so if that's going to be a problem for you, I'd suggest heading elsewhere for your erotic gamer-girl kicks. If softcore is cool with you, Vera has something she'd like to show you.

Pros:
Vera Baby is (usually) a redhead (but also a blonde, brown, purple, and raven-haired) beauty whose slim figure holds impressive (if augmented) curves. Quite heavily tattooed and usually sporting heavy, stark makeup and styling, Vera is almost the perfect alt.model. Her enthusiasm for dressing up in latex cosplay outfits, rubbing her body down in a soapy shower, and frolicking with both fans and girlfriends makes her site a joy to use.

The keyword tags in use at Vera's site keep you browsing in the right direction: artistic, dark, fetish fashion, gothic, halloween, and leather all direct you to appropriate scenes and galleries while other navigation tools assist with other enquiries. A thoroughly softcore site, you won't see Vera sucking dick here, but you will get many chances to watch her writhe around in a figure-hugging latex outfits, flashing her nipples at you via a mirror.

Vera's latest galleries are available for downloading and online viewing in 1600px and 2000px resolutions, while videos now reach 1080p resolutions in most cases. The imagery is often a bit dark and contrasty but that only lends the simple stripteases and to-camera flirtations more atmosphere.

Every one of Vera Baby's subscribers receives a smattering of bonus content starring the woman herself: mobile device wallpapers, sexy gif animations, as well as a members-only chat room and access to Vera's online journal. Free access to Sweet Ass Angels, a site on which Vera appears alongside other models like Ari Dee, Eve Cates (XO Eve), Janessa Brazil, and Katie Banks is also included.

Although the last few video updates did arrive one week apart, updates had been irregular and infrequent for some time prior, with two months passing between some updates. Photo updates are in a similar situation, recently active but only after unexpected gaps delayed the growth of the small site.

Server reliability doesn't exactly seem high here. Numerous videos I attempted to download were cut-off after only a few megabytes had been transferred, forcing me to rely on the (frankly a bit unreliable) video streams instead. More solid server performance is a must!

The content featured here isn't necessarily exclusive to Vera's site. Sometimes this is abundantly clear - men's mag cover shoots Vera throws online, her appearance in a TV report on cosplay babes - and other times it's not declared openly. Either way, there's not a ton of Vera Baby material out there, exclusive or not, so the inclusion of such stuff is understandable, just kinda superfluous.

Conclusion:
There's a flood of alt.models donning cosplay outfits and claiming to be the horniest, hottest, geekiest girls on the scene. They can't all be worthy of your undivided attention, though, can they? Stunning redhead Vera Baby makes a fairly strong case for earning your attention, though, what with close to 100 photo galleries detailing not only her exquisitely lithe figure, bold tattoos and makeup style, and incredible taste for fashion of all kinds (but especially latex and leather), but her undeniable seductiveness. Updates don't arrive as often as promised - videos, in fact, don't arrive nearly often enough, not even close - but there is a decent archive on the make here, an archive now offering 720p and 1080p videos and 2000px photos to more closely render Vera's incredible form and personality on your computer screen. Throw in free access to Sweet Ass Angels and some other tasty bonuses and Vera Baby starts to seem unmissable. Be warned though, this softcore site will only satisfy those hopelessly smitten with Vera and her fellow cosplaying alt.models. If you don't like tats and garish makeup, what are you even doing here?