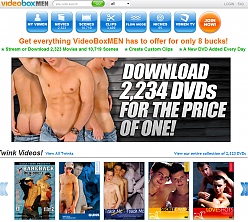 Overview:
Why should straight guys get to have all the fun? Videobox, one of the most consistently impressive hardcore adult video sites the Internet has ever seen, has long been heralded as the pinnacle of online porn viewing. Hosting tens of thousands of scenes and boasting of its frenetic yet routine update schedule, Videobox has become the gold standard in online hardcore archives… for straight folks! Thankfully, those who fancy a little dude-on-dude action will find the gay equivalent here at Videobox Men. Online now for more than six years, Videobox Men has been garnering rave reviews of late, largely for its extensive archive of premium adult productions. Offering its members a bevy of cock-smoking, butt-poking explicit smuttery, Videobox Men is one enticing proposition. Anyone with $15 in their virtual wallet can enter Videobox Men and enjoy the mass of offerings. With one new DVD arriving day and delivering anywhere from three to seven scenes, Videobox Men can (and does) change and progress quite rapidly, even in this hectic time of technological upheaval. The question remains, though: does Videobox Men live up to the legacy of the staunchly hetero Videobox or fail and flounder like so many other gay hardcore sites throughout the history of the WWW?

Pros:
The main attraction of a Videobox Men membership is surely the very large collection of licensed hardcore pulled from the archives gay porn's most prominent production entities. With more than 10,000 scenes pulled from over 2,000 DVD releases, there's an absolute ton of wild, raucous smut here and all of it can be yours for a surprisingly low cost.

Videobox Men is a generally well crafted site and its video streaming capabilities are excellent. Viewers can scrub back and forth along the video timeline with ease thanks to fast buffering and custom clips can also be made, allowing members to share their favorite hardcore moments with others.

An essential part of what has made Videobox (the straight one) a roaring success is the inclusion of interactivity features like comments, favorites, and the previously mentioned clip-making system. Not only does the commenting system keep the voice of the membership alive and kicking, it also serves to act as a preview, telling you (in another's opinion) what makes a scene or title great, or what makes it sink.

Cons:
Without a dedicated model index on which to showcase its fantastic performers, Videobox Men definitely seems lacking. With only a text menu to show for itself (and a difficult to locate text menu at that) the site keeps you from finding your new favorite bonk-beau as easily as you should.

Unlike its hetero counterpart, Videobox Male has not yet added any High Definition video content. Peaking at just 720x480 pixels, the current largest videos are rather unimpressive; even those that are far ahead of the other Videobox updates are still visually unremarkable. It's essential that Videobox Men launches an HD program very, very soon.

Videobox Men's content is quite obviously nonexclusive. Culled from the best and worst of the gay hardcore industry, titles and their scenes can be incredibly enjoyable and rewarding one day, an absolute bore the next. There isn't a whole lot of consistency here, I'm afraid.

With a fairly recent redesign that has also taken firm hold over every page on the straight Videobox, this all-male equivalent can pose a rather steep learning curve to those members used to the former layout and navigation system. The new design is far from perfect and is, in fact, missing a few key components: an advanced search function, and very limited filtering.

Conclusion:
Videobox Men steps into the spotlight usually inhabited by its big brother, the heterosexual Videobox, but unfortunately doesn't quite take hold as well as perhaps it should. That's not to say, though, that Videobox Men isn't a genuinely wonderful site loaded with a bevy of exciting, kinky hardcore movies; 'cause it sure as shit is that! It's just that it can't even hope to match the level of professionalism delivered on its straight counterpart. Videos are not yet available in HD and there's no sign of when they will be; the absence of a pictorial model index is a big problem; and the site simply lacks the strong sense of community and interactivity (which is present but lesser) that has made the straight Videobox such a long-lasting, unbridled success. That said, however, Videobox Men does hold more than 10,000 scenes, adds a new multiple-scene DVD every day touching upon a massive range of niches and fetishes, and, best of all, it only costs $15 a month.