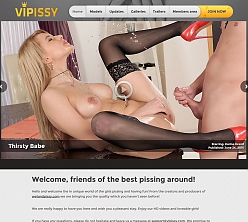 Some women like to perform stripteases for their partners. Others enjoy holding hands on a nighttime stroll. Others still get turned on by nothing more than a breeze on their neck. The women of VIPissy, on the other hand, are much more demanding. Whether givers, receivers, or versatile in the art of sharing urine, the European and American hotties featured in these exclusive, original watersports galleries and movies take great care to savor every last drop of the warm, yellow fluid shot their way, bathing and wallowing in it, using it as a temporary lubricant, and even drinking it down faster than you'd polish off a Coors Lite. One thing's for sure, the women of VIPissy sure love to get pissy!

Overview:
Having urinated on fine porcelain, a stranger's fence, a rose bush, and a few other objects towards which I felt no particular fondness, I can safely say I, personally speaking, view urination as nothing more than the removal of liquid waste from the body. Others, however, see the golden streams we unleash from our urethra as an opportunity to share a most romantic, intimate exchange. "Watersports" (or urolagnia) has proven popular among consenting adults for centuries and is now celebrated by a plethora of kinky adult websites, most notorious of which is certainly VIPissy. Filled with sexy young European and American models who shows no signs of shying away from the messier, wetter kinds of adult work, VIPissy shows these ladies pissing on each other, into the mouths of men, on themselves, and even inside their lovers during a heated bout of rumpy. Charging $29.95-a-month for access, VIPissy's archives of wild and wonderful watersports will surely prove urination just as sexy as any other liquid emission you'd care to name. "Enjoy our HD videos and lovable girls," the tour pages beckon, "in the unique world of the girls pissing and having fun!" (If you're still confused about exactly what a site like VIPissy entails, grab a raincoat and read on!)

In peak streaming and downloadable resolutions of 720p and 1080p respectively, VIPissy's videos delivers strong, vibrant images no matter how you view them. Streams buffer quickly and play smoothly while downloads offer crisper detail and sound. Wide-angle and close-up cuts of the scenes are also available, providing alternate views while the galleries take care of still imagery at 3000px peaks.

VIPissy adds another scene to its blossoming collection every week, adding photo galleries and their corresponding videos a day apart. And, just to add a little extra value to a VIPissy membership, Mr. Pink's has snagged a deal that'll get you five dollars off the regular monthly price.

Cons:
Every VIPissy scene is accompanied by an image gallery that, although labelled "Photos from scene" instead holds screencaps. The actual photo galleries can be viewed from the corresponding video pages only via zipped download. For online viewing you must use the general Galleries index.

Last time Mr. Pink's ran a review of VIPissy the site held only 36 scenes. Now it's a larger site, but unfortunately still hasn't reached a truly impressive size. Holding 125 scenes at writing, there's certainly still room for rapid growth, especially with VIPissy's second anniversary recently passing by without much of a celebration.

Dialog is minimal here, but when it does occur it's in Russian (or another language sounding to my ignorant ears quite similar) and left without English subtitles. This won't pose a problem to understanding the essential drive and premise of a scene, but it will make a complete understanding quite hard.

Conclusion:
VIPissy remains one of the strongest urination sites on the 'net, which is somewhat surprising being it has only been online a fraction of the time some competitors have. With vibrant 1080p HD movies and 3000px galleries showing every drop of yellow liquid in as much detail as possible, the content celebrates the sharing of urine between two women, a woman and a man, and groups of watersports enthusiasts. There's even a strong collection of solo scenes that see women pissing on themselves, in their own mouths, and into wine glasses they prompt gulp down. As fun and lively as VIPissy is, it's still not particularly large and the hardcore watersport niche simply won't suit everyone. Those who can't pass a public restroom without wanting to peek over a stall wall or catch that heavy-hanging sour scent wafting by, on the other hand, won't be able to get enough.