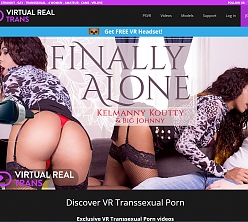 Fucking a tranny, her dick swinging back and forth as you fill her saintly asshole, may be a firm fantasy of yours, but it may never be a reality. It could, however, thanks to one brand new trans-focused 3D site, become your virtual reality escape! Virtual Real Trans offers a budding archive of face-to-face fucking, one-on-one erotica, and seated seductions performed by the EU’s finest trans-female stars. With stunning videos immersing you in every scene, Virtual Real Trans is inching you closer and closer to the real thing.

Overview:
Some fantasies are too daring or daunting to ever actually realize. You don’t really want to see your ex girlfriend fuck your dad, do you? And you don’t really want to tag-team your wife with another guy, watching him plow her like she’s never been plowed before, do you? That’d be a bit much for most straight guys, as would indulging that reoccurring little fantasy of fucking a trans-woman. The feeling of her intimately expert lips around your dick as her own gets harder, ready for you to stroke as you turn her around and fuck her from behind… Tempting, yes, but not something most would act out but that’s where VR comes in. Virtual Real Trans offers a fantasy fucking experience like no other this reviewer can think of: strapping on a 3D Virtual Reality headset and gazing into an immersive world where you enjoy copious sex with copious trans-babes, acting out all number of fantasies without ever having to spend precious vacation hours Yelping “trans clubs near me” again. Virtual Real Trans promises its members, who pay $15.95-a-month, access to its exclusive collection of steamy trans-encounters shot as if you’re an integral part of each scene. Since 2015, Virtual Real Trans claims to have been bringing its members everything from head tracking support to binaural sound, and even a free VR headset for those currently without. Surely, if you’ve read this far, Virtual Real Trans is something you’ve been dreaming about, so let’s not delay!

Pros:
Home to an exclusive archive loaded with steamy English-language scenes starring Euro trans-babes (and a few cis ones, too), Virtual Real Trans has something very solid to offer newcomers to its special brand of trans-hardcore. Cleanly shot and often quite elegant, the scenes range in sexual activity with lots of versatility on display from such models as Bianca Hills, Eva Paradis, Kimber Lee, Natassia Dreams, and the goddess Venus Lux.

Whether you’ve got an Oculus Rift, an HTC Vive, a Samsung GearVR, or a cheap-as Google Cardboard to view your VR content, Virtual Real Trans caters to your device’s needs. Videos can be download in 1600p and 1080p resolutions, at 60 fps with binaural sound (perfect for headphones), and 180° viewing, or they can be viewed online in solid HD streams.

Cons:
There’s not a lot of information provided with each Virtual Real Trans scene, not even a date. Without dates, it’s hard to tell just how often the website updates. It seems it doesn’t do so any more frequently than once every two weeks. At this rate, it’s unlikely we’ll be seeing any 4K quality video upgrades here anytime soon.

Each update provides more than just the VR video in a variety of formats, but not much more. Photo galleries don’t offer much, only seven shots per scene. Photos aren’t provided in either zipped sets or high-resolution versions, either, which makes it all a bit disappointing for photo fans.

If Virtual Real Trans were to see some rapid growth, it’d be great to see it include more scenes co-starring trans and cis women. Watching Amarna Miller and Silvia Rubi enjoy the unique gifts of their trans-co-stars was great fun and it’s a promising path for this still-fledgling VR site to head down.