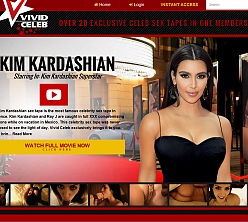 Pros:
Celebrity sex tapes only seem to be rising in popularity and pop-culture prominence. Ever since Pamela Anderson and Tommy Lee had their home movies stolen and leaked, the industry has flocked to celebrity tapes for a quick buck and a surge of public interest. Vivd Celeb brings you the above mentioned celebs, as well as WWE's Tammy Lynn Stych, former Playmate Shauna Sand, and Brittney Jones, an ex of Ashton Kutcher, all getting nasty.

Although Vivid Celeb isn't very large and currently holds only 25 celebrity sex tapes, each recording offers a few scenes with different footage. Updates are only being made when new content is found and purchased by Vivid, but you can sign-up, log-in, and wait for the possible arrival of a Kesha or Khloe Kardashian explicit sex romp.

Cons:
Just because you've heard someone's name by the water cooler or seen their show advertising online, that doesn't mean you'll want to watch them have sex. A few of the celebs featured here at Vivid are grossly opportunistic and out to use their "stolen" sexuality and victim complex to make their mediocre star rise a few spots. The sources and image quality of movies ranges quite a lot and isn't always that watchable.

"Celebrity" is pushing it. A woman known to engage in cyber-sex with a former New York congressman, a hip-hop groupie, noted Hollywood degenerates, and women who claim to have slept with also-ran male stars of the past two decades… these aren't exactly Judy Garland-level leaks, folks.

Conclusion:
Vivid Celeb promises to be the only proper decent game in town when it comes to celebrity sex tapes, both the leaked and stolen kind and those shot with public release in mind. The star-studded roster includes many well-known celebs and famous people who arguably became more famous due to the footage held here. It's a shame that so much of Vivid Celeb is grainy Hi8 video footage, lacking detail as it does, but the inclusion of 1080p HD content is a very pleasant surprise. With no downloads available, streams handle all playback and force members to keep their access current in order to view anything at all. After a sex tape leaks and becomes a hot gossip topic all over the USA, Vivid Celeb can seem a bit redundant. And, really, does anyone want to watch Tom Sizemore smashed out of his mind, trying to fuck the Heidi Fleiss-inflicted pain away? Oh, you do? Then, you horny little gossip hound, Vivid Celeb is most certainly a good fit for you.