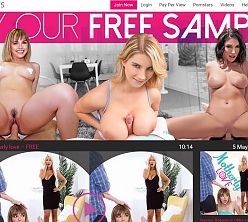 Overview:
Growing up totally obsessed with video games, I likely ignored the erotic potential of such tech marvels as the Nintendo Virtual Boy, instead dreaming of fighting holographic combatants or running around a 3D polygon world. Now that Virtual Reality technology has well and truly arrived and is thrusting viewers into immersive interactive environments, however, virtual sexcapades are rapidly filling the ‘net. VR Bangers makes its claim on VR porn viewers’ attention with a bevy of quality VR encounters starring the lusty, lascivious likes of Lena Paul, Riley Reid, Tia Cyrus, and Valentina Nappi. Conjuring up all kinds of scenarios from tourism turned sexual diplomacy to solo beachside yoga sessions turned outdoor orgasm sprees, rich bitches from Beverly Hills getting dicked down to foxy female artists getting messy with their paint palette and a well chosen penis, VR Bangers has risen to become one of porn’s preeminent VR outlets. Promising wide device compatibility and high quality audio-video presentations, not to mention scorching hot sex, VR Bangers invites you, the headset sporting home viewer, to strap in, stop by, and shtup your virtual brains out, all for the modest monthly cost of $29.99. However thrilling your actual life may be, surely it’d be that much hotter with a few of VR Banger’s virtual bonings!

Cons:
The bigger and bolder the concept, the less likely it is that VR Bangers can ensure the sex remains realistic yet visually powerful and not just a parade of cool set design and grand dramatic moments. If you’re after a purely realistic virtual sex experience, you’ll find only a small portion of the VR Bangers collection may suit.

It may seem like a minor issue to some but with scene previews not being the most graphically forthcoming, a strong written synopsis can be very useful as you try to select a mammoth VR to download over the next hour or so. VR Bangers falls a little short in this regard, giving some info about the scene but little about the actual sex in the preview captioning and synopses.