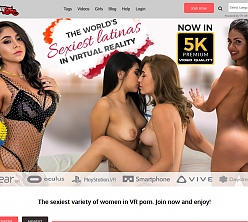 VR Latina pops out of the virtual sex-o-sphere to dazzle fans of curvy Latina cuties and eager sluts with awesome VR romps of a hardcore nature. Whether she rises from the bubbles of a warm bath or presses her ass against your thigh in the early morning light, each sexy virtual lover you find at the 5K-equipped VR Latina is damn near dynamite. Don’t miss this one, Latina fans, ‘cause it doesn’t get much closer to bliss than this.

Having made claims of bringing members 5K videos at 60FPS, it’s great to see VR Latina delivering on that promise. Streaming in your browser should probably be reserved for previewing purposes and downloading of the large Ultra-HD video files for local playback, stronger visuals, and a more immersive experience. Visually, VR Latina isn’t extravagant or ground breaking but it is very solid and a pleasure to look at.

VR Latina updates roughly once a week, sometimes missing a week only to come back stronger the next. The current archive offers more than 90 scenes of hardcore Latina loving and lays everything out for you on a neat, if somewhat bland, website. A recent blog post promises a lot more scorching hot virtual sex to come, so keep your peepers parked on VR Latina.

Cons:
VR Latina owes a lot to its excellent performers, women whose charm and sexual appeal pulls you deep into the immersion of their virtual world of sex. Unfortunately, VR Latina hasn’t provided members with much information on their models, only a few lines pimping their appeal. It’d be great to learn more about these women.

Delivered almost entirely in Spanish, VR Latina won’t be easily understood by anyone limited in that language. The women flirt and seduce you and it all seems highly exciting even without Spanish comprehension, so it’s by no means a deal breaker - or it shouldn’t be. Shooting more models who can pepper their Spanish with English may bring VR Latina broader appeal.

A very small gallery of six photos is all picture fans are given at VR Latina. What’s most disappointing is that the provided photos are often extremely vivid and capture the models perfectly. Galleries only twice the size would already make plenty of people very happy, I’m sure, let alone galleries of 50 pictures.

VR Latina’s update schedule is a little slippery. Although it does bring you roughly one new scene each week, some presumed updates come later than expected. It’d be reassuring if members could see a tighter, more predictable schedule in place soon. This is by no means a minor site and it shouldn’t be treated like one.

Conclusion:
It may not yet be among your usual slate of VR sites that zap you out of your dull everyday reality and port you to a world of wondrous sexual fantasy but if you’re fond of Latinas, love a sexy accent speaking Spanish (or better yet, speak Spanish yourself), and want to slide into their virtual panties, VR Latina is the perfect opportunity to do so. The great video options suit all the most common VR devices and headsets and includes a 5K Oculus option of staggering detail. The language barrier will obviously be a problem for many would be viewers but I urge those folks to scope the model roster before dismissing this site. Immersing yourself in virtual sex with this incredible cast of Latina minxes is not an opportunity to be ignored and there are precious few sites of VR Latinas’ theme and quality around. If you’re a true Latina lover, VR Latina is damn near a must-see.