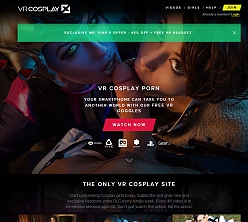 It often sucks when our partners don’t share our interests and can’t join in the enjoyment we experience. When that interest goes beyond just watching a show, reading a comic, or playing a game, extending into elaborate sexual fantasies about the sexiest characters involved, it’s understandable that a girlfriend might balk at dressing up as Sailor Moon. But Emma Hix won’t. In fact, Ms. Hix is just one of dozens of top-ranked pornstars who’ve dressed up as our favorite pop-culture characters to bring our filthiest screen-fed fantasies to life! From the makers of BaDoinkVR, the colorfully carnal VRCosplayX has enough UHD 3D VR smut to make your every filthy fantasy a virtual reality.

Overview:
Try as you might to convince your girlfriend, wife, or semi-regular fuck-buddy to dress up as your favorite pop-culture character, deliver a few memorable lines, then indulge your most adventurous and unrealistic facial-dumping fantasy, likely ruining a costume she paid good money for, sliding your dick into Sailor Jupiter, Wonder Woman, Tinker Bell, or Tank Girl has remained off-limits. Dream of dicking down an alien babe, space warrior, post-apocalyptic survivalist slut, Star Trek crew member or superheroine but can’t quite seem to make it happen? Well, you could reign your fantasies back a little closer to reality or you could throw down some cyber-cash and dip into the exclusive costumed carnality of VRCosplayX, a wonderland of powerfully immersive Virtual Reality sex scenes where you, you lucky headset-wearing motherfucker, get to take all kinds of fantastic women to the ol’ bone zone! Imagine ending a tussle with a Sonya from Mortal Combat not with decapitation but a well-aimed facial cumshot! Or sneaking off into the X-Men’s Danger Room for a quick romp with your favorite temporarily intangible mutant, Kitty Pryde! Throw down the $28.95 required for monthly access and you’ll be up to your wrists in a variety of immersive fantasy worlds occupied by your most ogled pop-culture babes.

Pros:
With so many VR sites serving up pretty basic hardcore sex, VRCosplayX seems to be one of the few virtual endeavors to really capitalize on the new technology. Remarkably good makeup and costuming help matters along, but the staging of each scene is definitely crucial. Thankfully, aside from a few encounters that run a little dull, VRCosplayX fucking kills it with superior VR fantasies!

VRCosplayX doesn’t skimp on the video quality, providing UHD versions suited for Oculus, Vive, Samsung Gear, Daydream, and a wide range of smartphones. Streams provide decent viewing but it’s the downloaded 60fps UHD videos that really deliver the goods: crisp, clear 3D video that thrusts breasts towards you, grinds hips into your lap, and beautifully shows off the awesome costuming in use here.

A quick run down of stars and characters should convince any pop-culture nut to head on over to VRCosplayX: Blondie Fesser as Jessica Rabbit, Emma Hix as Sailor Moon, Jillian Janson as Scarlet Witch, Taylor Sands as Tatooine’s sexiest Tusken Raider, Anna Deville as Batgirl, Eva Berger as GoT’s Sansa, Carmel Anderson as Tinker Bell, and both Chanel Preston and Kiki Minaj as Wonder Woman!

A new chance to throw yourself into the pussy of a colorfully costumed fuck-doll arrives at VRCosplayX every Friday and brings a range of video formats and a small photo gallery to your screens. Though members receive no free network or bonus site access, VRCosplayX can now be joined for just $14.95, a damn good price for an 86-scene collection of such thrilling content.

Cons:
VRCosplayX may be substantial in size, but it sure ain’t huge. The site really has no serious competition and is a good deal for anyone into hardcore cosplay or fantasy VR content but the current discount is unfortunately valid for only your first month. After 30 days fucking your way through alien races, video game classics, and TV’s foxiest leading ladies, you’ll have to pony up a little more dough.

Look amazing though they may. some VRCosplayX scenes are, as noted, a bit boring. Imagine conceiving of a Little Mermaid scene and sourcing a scaled flipper-skirt and not thinking to include even a drop of water - no bathtub splashing, no breasts breaking the water’s surface, nothing. The sex can still be very hot even when the concept isn’t very well fleshed out.