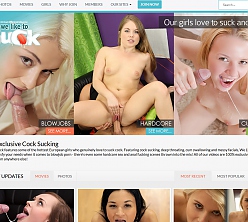 Pros:
Starting out in massage parlors, couples’ bedrooms, offices and boardrooms, and hotel suites galore, each We Like to Suck scene details an introduction, a seduction, and a whole lot of delicious oral action. There’s some vaginally penetrative humping and bumping to be seen here, too, which will surely delight many would-be members.

The “We” in “We Like to Suck” refers to a cast of some 204 adult performers, mostly young, mostly European, and all eager to prove their fellatial fortitude. Noted suckers and blowers include Amanda Vamp, Camilla Moon, Apolonia, Luna Corazon, Sasha Rose, Lexi Dona, Ella Rosa, and Paula Shy.

Updating every two weeks, We Like to Suck grows its already large archive beyond the current count of 228 scenes with one more photo and video set. When you include the free bonus access to other Puffy Network websites and factor in the $14.95-a-month discount scored for Mr. Pink’s readers, We Like to Suck is a damn fine deal for Euro-fellatio fans.

Cons:
We Like to Suck has never had the most consistent update schedule, varying between weekly and fortnightly updates from its 2011 launch. Nowadays it seems to have settled on two updates per month. Not the most exciting update schedule, to be sure, but at least they’re still coming.

Eurobabe Facials, the single other network site focusing on oral sex, no longer makes updates to its modest archive. it’d be great to see another site added to pick up the slack, something to ensure that there’s at least one new blowjob-heavy scene added to the Puffy Network each week.