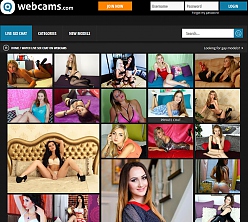 Nothing speaks to the advantages of advanced technology more than its use as a sexual aid and there's nothing quite as simply effective as the adult webcam site to illustrate this point. Webcams isn't just the most obviously named adult webcam site currently in operation, it's also one of the most streamlined. There's nothing here but free public shows, paid private shows, and archived photos and videos starring almost 15,000 female, male, transsexual, and couple performers. While not exactly the world's worst cam site, Webcams is by no means the best and simply offers its members the bare essentials of an adult live video experience. Sometimes, though, that's all one needs.

Overview:
Long ago, in a time before video conferencing, FaceTime, and cell phones that doubled as personal computers, people used to use a device called a rotary telephone to reach across the state, the country, the world and communicate verbally with each other. What's more, they marveled at how high technology seemed capable of crossing the most divisive barriers to bring people together and create communities. Nowadays, only old folks who've not had a phone call in decades still own a rotary telephone. Instead, everyone seems to be video chatting on the bus, the train, or on an airplane as it taxis to the runway (even though that fucking "No electronic devices" light is still shining brightly). Portability is great, of course, but this video-to-video calling still seems to have reached its apex with adult webcam sites, of which Webcams is clearly the most simply and obviously named. Hosting a wide variety of live models from around the world, Webcams is, well, a live webcam site that allows you to throw down some money and get your freak on with an online freak! Pretty simple concept, huh? Accounts are free and allow you to browse the lists of models both online and off, and also to enjoy the free chats most models seem eager to give. An archive of supplemental galleries and videos is online, too, so you'll always have something to ogle even if your favorite girl is taking a break. Whether you're after some face time with a pornstar or plumper, an "alt" girl or Asian - or, hell, even a tranny, a MILF, a couple, a trio, or a dude with a boner - Webcams promises something for everybody.

Most Webcams models give you a free taste by offering chat services that won't cost you a dime. Sure, these free chats aren't likely to be filled with perky nipples or extreme close-ups of engorged clits, but they're a great way to see a girl (or guy or couple), exchange a few words, and see if you'd like to take things further.

Unlike many adult webcam sites, Webcams usually has quite a lot of models online at any given time. During the time I spent reviewing the site, the number of online performers peaked at almost 200 live broadcasts. Sure, there were only a couple of pregnant girls and redheads included in that number, but it's still far more than most sites manage.

Unlike many Webcam sites that seem stuck in the past, Webcams offers a good selection of HD cam shows. Although they're by no means 720 or 1080p, these videos look significantly better than your average murky, pixilated broadcast and are a welcome upgrade.

Cons:
Just like every other adult webcam site on the 'net, Webcams can get very expensive very quickly. Private shows cost at least $1.99 (in tokens) per minute and many performers don't offer free chats, instead forcing you to pony up before you know what you're getting. With tokens costing about $1 each (but cheaper when bought in large quantities), that translates to about $20 for ten minutes, minimum.

Viewing the archived videos and photos also costs, to the tune of 100 "cents" or $1 (equivalent in tokens) per photograph and between $3 and $7 per video. Added to the already high cost of live shows, this supplementary material can drain your wallet much faster than a model can drain your reservoir.

Even when advertised as HD, many cam shows are not very high quality and offer only blurry, pixilated images. Many are also video-only, leaving you without one of the most underrated yet essential components of a good webcam feed: the sound of the person on the other end.

It's one thing to enter a free chat and see the girl on the other end clearly using multiple computers and running multiple cam shows at the same time. It's another thing to find her still doing after you've started paying for "private" time. Hell, some girls even allow multiple users into a "private" room, making that particular designation flatly incorrect.

Conclusion:
With a name as clear and concise as Webcams, you'd hope this site would be the be-all and end-all of adult webcam sites. Unfortunately, it's not. That's not to say it doesn't deliver some solid performers giving solid performances in reasonably clear video streams, just it doesn't really do anything noteworthy either. Video streams generally look adequate, but even the "HD" ones fail to make a particularly strong impression and the costs, my dear lord the costs, are predictably high. Even though you can get inside and sample the free public chats without paying a cent, as soon as you start initiating private chats or viewing the archived (and generally unimpressive) photos or videos, you'll really start to feel the financial strain webcam sites so often place on their users. If it lowered costs ever-so-slightly and culled the more dull and lifeless models from its ranks, Webcams could very well move up a few places on the ol' Pink-O-Meter, but as is, it's unremarkably unremarkable.