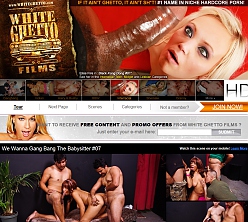 Pros:
White Ghetto’s catalog of DVD titles give a near-perfect description of what this network offers its members: Lifestyles of the Cuckolded, Dark Meat, Caught Banging the Babysitter, Your Dad’s Cock is Huge, and I Was 18 50 Years Ago. All of this interracial, generation-gap-bridging, sexually fluid, caring-and-sharing carnal activity results in one wild-ass network. White Ghetto’s a wild place to beat off!

The daring women, men, and trans performers throwing themselves to all kinds of sexual lions at White Ghetto include some of today’s brightest young starlets and studs. From deviant debutants like Bonnie Grey and Scarlett Sweets to veteran whores Rachel Solari, Rita Faltoyano, Tori Avano, and Kiki Daire to trans-starlets Chelsea Marie, Venus Lux, TS Foxxy, and Nina Lawless.

New content hits White Ghetto every fourteen days or so, dropping another scene pulled from a DVD soon to fully arrive. There’s already a wealth of debauched smut here, too, more than 3,500 scenes from over 1000 DVD titles, in fact. What’s more, most new updates land with 1080p HD streams and downloads offered alongside 1920px photo galleries.

Along with the main White Ghetto archive and all the insanely adventurous fucking it holds, members also receive access to both Devil’s Film and Fame Digital networks. Each network boasts huge collections filled with all kinds of wild and unpredictable sex, as well as plenty of mainstream fare, making for a truly awesome bonus. And, now discounted to $14.95-1st-month, White Ghetto is a damn fine get!

Cons:
It almost goes without saying - the name should be warning enough - but White Ghetto won’t suit all viewers, even all of those with a taste for the absurd or outlandish. Some titles tread too closely to absolute stupidity to be even remotely sexy, instead acting as a parade of human sexual antics that nobody would ever try with a real lover.

A look at White Ghetto’s update page and you’ll no doubt notice that some titles are of a notably older vintage than others. Thankfully falling short of blatant re-uploads of already available content, White Ghetto does, however, bring members “new” content that is really anything but, shot anywhere from three to fifteen years ago.

Conclusion:
Propriety be damned, White Ghetto is still going strong, delivering to its members a wide range of utterly obscene sexual misadventure. Updates land about every two weeks, which isn’t the most satisfying schedule but certainly does the trick of keeping members fairly busy. And, hey, if they get bored, the free access to a wealth of Devil’s Film and Fame Digital websites and their collective barrage of near-daily updates should keep ‘em entertained! Factoring in this network access, anyone with a penchant for socially extravagant sex, humiliation and degradation, and other transgressive acts would do well to take advantage of current discount deals and slide into White Ghetto for a damn fine time. From simple tranny blowjobs to BBC-addicted MILFs laughing at their tiny-dicked husbands as they down another load, White Ghetto makes for a strange, somewhat confronting, but definitely thrilling hub of wild hardcore.