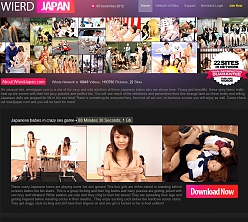 Wierd Japan, as part of the 19-site All Japanese Pass network, offers all its members free access to every one of its sister sites. Boosting the value of a Wierd Japan subscription more than twenty-fold, this is a huge bonus and makes the discounted membership cost of $19.95 seem downright insane!

Although the search engine gives some direction to your browsing, most Wierd Japan scenes lack appropriate tags and can be tricky to find without tedious hours spent clicking through each page of the archive. There are no tags, for example, pointing you to scenes featuring tentacles, masks, sex dolls, or space adventurers, all of which appear multiple times on this site.

Some scenes have been uploaded to Wierd Japan more than once: a duplicate scene will often appear right after the first iteration lands online, delivers almost exactly the same scene (with minimal editing or trimming) and even shows the same thumbnail preview. This not only pads the not-exactly-huge Wierd Japan archive, it makes browsing more laborious.