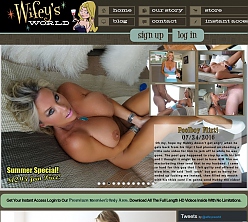 Wifey's World viewers don't just get to see Wifey in action, but also her "sister" and "neighbor" - though that's just Wifey in a wig. It'd be great to see a bit more effort put into the costuming and characters, perhaps even extending the idea to the ever-popular cosplay niche, but even as it stands, Wifey's commitment to role play makes for fun variety.

Another encounter with Wifey and her roaring sexuality lands here about once a week, adding both photos (at 1124px online and zipped) and videos at 480p and 720p resolutions, the latter High Definition and offering good smooth images. Throw in a great selection of scenes and galleries starring Wifey's "friends," as well as a lively blog and some bonus imagery from the woman herself and Wifey's World's looking pretty welcoming.

Cons:
Wifey's World has been online for over almost twenty years now, launching in 1998. After so long, the premise is starting to get a little tired and even the most devoted Wifey-philes must be wishing the site would see an adrenaline shot of new thrills. Just where that shot will come from is anyone's guess, though recent blog posts referencing Wifey's new BBC fuck-boys is a hopeful sign.

The latest at-home hardcore efforts from Wifey and her husband are delivered in 720p HD MP4 videos worth either 480p or 240p SD videos also on hand. It'd be wonderful to see Wifey's incredible breasts take a creamy load in 1080p HD, or even to see older content properly remastered for the HD era. Improvements could easily be made in Wifey's AV department.

A transfer limit caps your simultaneous downloads to four individual files. Collectively, you're also stuck with 10 GB download allowance each day. Sure, you're not likely to pass such a lofty amount of data, but if you're a supreme hoarder out to finally snag a complete Wifey's World collection, these limits can make it frustrating.