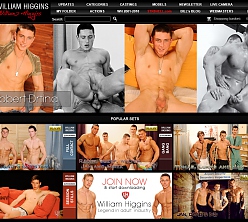 Overview:
William Higgins is not as well known as people like John Stagliano, Jules Jordan, or even ol' Ben Dover, but that's probably only because there's not a single female chest, ample and heaving or otherwise, in Higgins's work. He's a man's man. He's so much a man's man that he spends his professional days behind a camera, shooting photos and videos that hope to capture the seductive physical, emotional, and psychological attributes of young men who're clearly cut out for adult modeling. ('Cause they're superhot!) From thin twinks to thick, juicy beefcakes, there's lots of manly variety here at William Higgins, where you'll see these guys strip solo, stroke their hard-ons, fondle and fuck each other one-on-one and indulge in some of the most salacious gay group sex you've ever seen. (Though I bet those Ancient Greeks had 'em beat.) Costing $29.95 per month, a William Higgins membership promises to keep you well fed with gay hardcore delights of a most manly variety - and that's not an offer you'd want to mindlessly skip past, now is it?

Pros:
Gorgeous hunks of masculine flesh seemingly carved by the hand of a supreme being, they're the kinds of men you'll find at William Higgins. (Well, them and twinks.) Some notable models include

Mr. Higgins himself isn't without significant talent, as his world-class photography attests. He's very gifted with natural light but also makes good, sensible use of studios for much of his work. Images are shot well and presented well in 800px and 1280px frames, while videos reach 720p and 1080p HD formats and look very good, summoning up a sultry and decadent atmosphere.

There's a ton of content online here at William Higgins, but that's not surprising since Higgins himself has been shooting over a decade. With updates bringing daily doses of meaty man-flesh to your fingertips and more than 5,000 videos and 12,500 galleries already available, you'll never be left wanting by WH.

Cons:
HD video fans will be super-pissed that all 1080p William Higgins videos have been reserved exclusively for those willing to pay an additional sum of $9.99 per-fucking-video to BurnDVD in order to view, download, or, yes, have it burned to a DVD and mailed to you.

Heavy downloader? Hoarder? William Higgins has in place a 7 GB download cap that'll prevent you from saving any further data once hit. You'll be disabled for a while before coming back into the fold, but who wants to be a member of a site that'll keep you from the goodies?

The design, layout, and navigation system of William Higgins can be far too cluttered for intuitive use and you're bound to find yourself lost and frustrated at the lack of clear direction at least a few times.

Older William Higgins content from decades past is on a separate site with poorer design, weaker navigation, and imagery far less impressive than what's freshly been added to the collection. It's strictly for those into accumulating a nostalgia file.

Conclusion:
William Higgins has over a decade of work behind him and it shows in the professionalism, artistic quality, and enormous collection content archive seen on his self-titled website. Videos reach HD resolutions, photos are high-res, and both look great. (Though being forced to pay ten bucks for the 1080p version of a scene is absolutely out-fucking-rageous!) The guys come in all shapes and sizes (as long as they're sexy) and do a bang-up job in most cases, shedding their clothes and their inhibitions to unveil their sexualities to the world. You, you lucky dawg, get first dibs so long as remain a William Higgins member. If only you could ignore the download limit, the cluttered layouts, the poor-quality older content, the occasional dead-eyed stare… Through the power of Higgins's near-unrivaled work, perhaps you will!