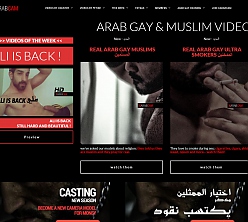 Pros:
Is XArabCam the most taboo webcam site on the ‘net? It sure as shit looks like it! Flying their freak flags high in the face of close-mindedness, religious oppression, and threats from neighbors, the hunky middle-eastern men seen here thrust themselves into the webcam-supported spotlight and show off what they’re forced to keep hidden at home.

Hosting guys from all over the Arab world, XArabCam invites you to sit back, relax, and pleasure yourselves as the muscular, bearded, dark-eyed men on your screen do the same. Though these videos are not live broadcasts but videos previously aired and ripped for this archive, XArabCam nonetheless serves up many sexy guys from a fair range of ages and physical styles.

Alongside the main drawcard, thousands of archived webcam clips and movies starring big-dicked Arab guys, XArabCam also provides its members with guides to cruising in major cities of the middle-east, model competitions, fetish galleries and blog posts, and an Android app for mobile viewing.

Another great bonus provided to all members, free short-term access to a photography site specializing in Arab men posing for a high-res camera. Similar to XArabCam’s method of trawling the ‘net for risqué shots and clips of Muslim and Arab men mid-masturbation, Radar seems a tantalizing still image option.

Cons:
Most webcam sites offer their fans the chance to pay only for what they intend to actually view. No XArabCam. Monthly charges mean you’re stuck with a full 30 days of access at a minimum, whether you like it not. Thankfully, the tour page previews show a fair amount of detail so any curious party can check out the wares at least a little before joining.

Video quality of XArabCam content seems to peak at a 960x720 pixel resolution. Rarely even approaching HD, the seeming majority of XArabCam videos come to you quite low-res and lacking in the precise detail of true HD content. Apparently pulled from a wide drag of the Internet’s back alley barrooms and unlisted social clubs, these archived videos are hard to authenticate or find really any information on.

The design, layout and navigation system guiding you around XArabCams is far from perfect. A blend of English text and (I believe) Arabic, things can get confusing as you attempt to find that particular guy to satisfy your masculine cravings. Many links seem to bring you back to the same basic homepage.

Conclusion:
Any site dealing exclusively in Muslim and Arab men is likely to court controversy and XArabCam is undoubtedly going to tick off some more conservative religious folk. (Granted, that means they actually find the site and examine its wares.) Inside, members of XArabCam may enjoy the burgeoning roster of chiseled, stoic, and seriously sexy middle-eastern men, watching them stroke their cocks, cup their balls, and flex their bodies before the camera. Unfortunately, video quality is quite low here with most videos seemingly up-converted to 720p/i from obviously standard def sources. Just how much content is online is also unclear thanks to the often confusing and disorienting navigation. As I understand it, XArabCam is the work of one intrepid entrepreneur intent on expanding our sexual world view and neighborly feelings of lust, love, and attraction. That man should be commended, absolutely, but perhaps a little help would improve XArabCam and increase the likelihood that men from East and West alike will stop by, fall hard for Wasim, and never leave this digital address ever again.