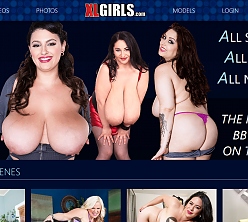 In HD streams and downloads, XL Girls showcases its models and their marvelous bodies in 720p resolutions. Clear and quick to load for online playback, these videos are good but fall a bit short of expectations. Photo galleries are almost the trump card here and present the best shots of the models looking their foxiest, fattest, and finest.

Cons:
XL Girls’s streaming videos peak at 720p and, though they’re technically High Definition, you won’t go mistaking them for the 4K Ultra-HD smut some other sites are now pumping out on the regular. There do exist 1080p HD versions of this XL Girls content but it’s all held behind the members-only paywall of PornMegaLoad.